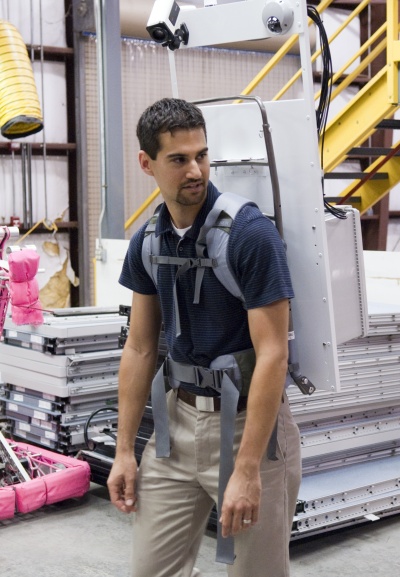 Mike Miller demonstrates one of the backpacks his team designed and built for the Desert Research and Technology Studies (Desert Rats) project's upcoming field test in Arizona. Miller led the team that developed the backpacks. The backpacks are equipped with GPS antennas, communications components and cameras. They are meant to show researchers what an astronaut might need to explore an alien world and give designers a look at the hardships the equipment could encounter [NASA/Frank Michaux].
Steven Siceloff
NASA Kennedy Space Center

"A team of astronauts, scientists and engineers from several NASA centers head to Arizona's desert each year to simulate the unique environment of space explorers. The effort is meant to test equipment and people to find out the best way to explore another world.

"Kennedy's engineers develop the communications, navigation and data transmission networks needed, a task that includes a semitrailer set up as a mission operations center, a command vehicle, a specialized RV, a pair of Humvees plus enough communications gear to set up a wireless network for a small crew of explorers to talk back to "Earth" like they will from other planets.

"Equipment from other centers, such as a pair of large rovers, has to work on the same communications network. The rovers, for example, relay the signals from the backpacks to the mission operations center.

"Although the area they test in is not a perfect stand-in for the moon or Mars in terms of having breathable air and normal gravity, the site does a pretty good job of isolating the participants, said Mike Miller, communications research engineer at Kennedy.

"We have to take everything to the site, just like we will to other planet surfaces," Miller said."
Read the full story, HERE.
Posted by Joel Raupe at 6:00 PM