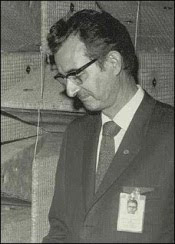 John New, an engineer at NASA's Goddard Space Flight Center who developed a series of methods and facilities for testing satellites during the early days of space flight, died July 28 at the Renaissance Gardens assisted living facility in Silver Spring. He had pneumonia.
In 1959, Mr. New joined the recently formed Goddard Space Flight Center in Greenbelt (Maryland) as the founding director of what became known as the Test and Evaluation Division. With meager resources, he set up a laboratory in a converted warehouse and soon expanded it to include dozens of buildings.
Much of the early equipment was borrowed or handmade, as Mr. New and his engineers developed facilities and tests to ensure that early satellites could withstand the intense sunlight, stress and gravity encountered in space.
Within two years, NASA had successfully launched three satellites, each of which had undergone rigorous testing by Mr. New's staff. The goal of the unmanned orbiting laboratories, in the words of NASA's first administrator, T. Keith Glennan, was "to expand human knowledge about space for the benefit and peaceful use of mankind."
Read the Obituary, HERE.
Posted by Joel Raupe at 9:21 PM