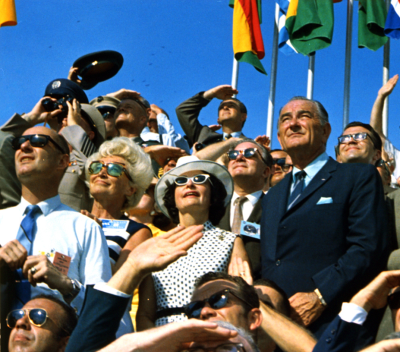 Four days shy of six months out of office, former President Lyndon Johnson (right) watches the launch of Apollo 11, together with Lady Bird Johnson and Apollo 10 Cmdr. Thomas P. Stafford, Jr., July 16, 1969. Whatever else might be said of LBJ, no single politician can be more credited for the creation of NASA as a civilian space agency or for shepherding the national resources necessary to achieving the Apollo lunar landings, as Senate majority leader, Vice President and President. Like Johnson, NASA is a "creature of Congress" [NASA].
“Today outer space is free. It is unscarred by conflict. It must remain this way… Men who have worked together to reach the stars are not likely to descend together into the depths of war and desolation.” Senate majority leader Lyndon B. Johnson (D-TX), 1958
Taylor Dinerman
Hudson New York

Perhaps the primary goal of the Obama administration's 2011 budget NASA proposal was to kill, once and for all, the Apollo Moon mission model that has determined the way the US space agency operates for nearly the last 60 years.

The so-called compromise proposal that unanimously passed the Senate Commerce Committee on July 15th gutted most of the Obama proposal. The House version does even more damage to the administration's proposal. While the Bush era Constellation program would seem to be dead, at least in name, its substance has survived for at least another year. There is a lesson here, not only for those who would reform NASA, but also for those who want to reform any reasonably sized government agency.

The first lesson is: Do not ignore Congress. NASA as it exists is the product of decades of Congressional action. Reformers may believe that they know what the agency needs, but without Congressional support, they have no hope of making a difference...

Read the article, HERE.
Posted by Joel Raupe at 3:37 PM