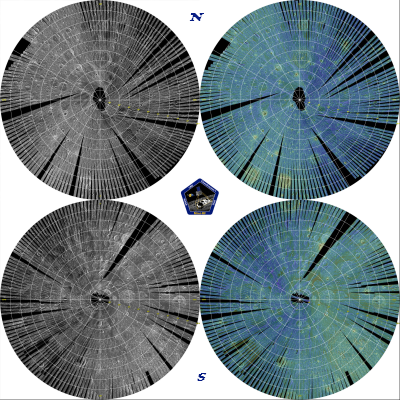 The Mini-RF radar instrument on-board the Lunar Reconnaissance Orbiter has just completed its first month of systematic polar mapping. These mosaics cover from 70° to the pole for both the north (top) and south (bottom) polar regions. The left-hand images show radar brightness whilst the right-hand color images also show the circular polarization ratio. These data will be analyzed to search for ice deposits in the floors of the permanently shadowed craters, as well as to learn more about the impact cratering process on the Moon. 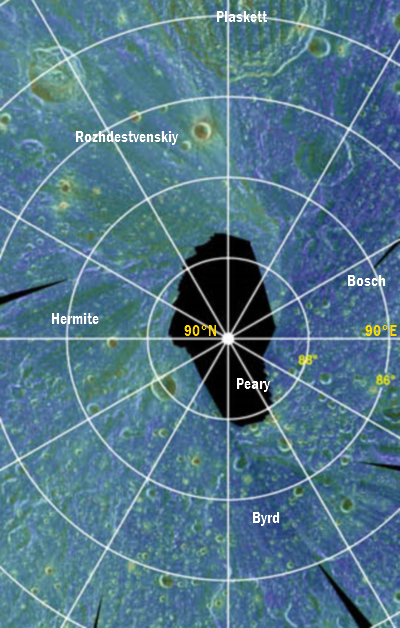 In this close-up of the full-size mosaic released by NASA August 7, most of the resolution is drained of the very granularity investigators are looking for, and have found at these highest northern latitudes, indications of changes in the polarity of radar signals returned to the spacecraft consistent with, among very few other things, hydrogen in a bound state with oxygen, as frozen water. Lost in this hazy reproduction also is a small crater singled last month showing a exceptionally strong indication. (See Potentially ice-rich' crater in Rozhdestvenskiy, Friday, July 2, 2010).

Familiar relief is obscured in Mini-RF (and in representations of data returned by the somewhat less sensitive but proven valuable Mini-SAR instrument flown on India's Chandrayaan-1), but the information obtained is like nothing else. Mapping and narrowing the possible composition of the lunar surface must be an exceptionally interesting study in images not yet available to the public [NASA/GSFC]. 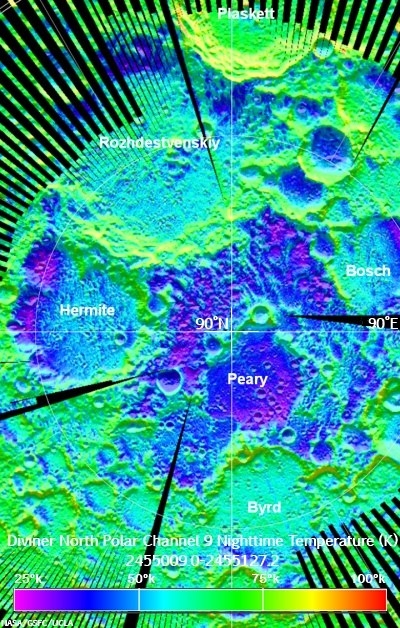 This nighttime temperature map, shown for reference, assembled from LRO Diviner data closely matches the field of view further up. (Left center, along the western interior of Hermite is an area unseen until LRO, within a permanently shadowed region now known to host the coldest temperatures yet detected in the entire solar system, during long lunar night only 25 degrees K.) [NASA/GSFC]
Posted by Joel Raupe at 3:43 AM