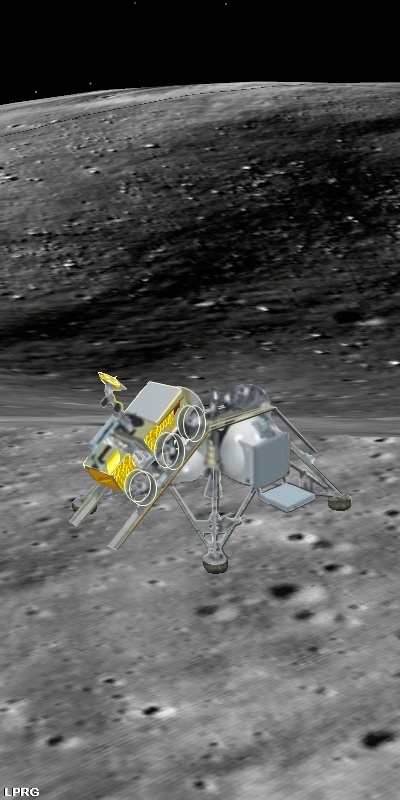 August 3 – The Hindustan Times reports the unmanned Russian lunar lander Luna-Resource, after ferrying and supporting the lunar rover segment of India's Chandrayaan-2 mission, will be an entire stationary mission in its own right, equipped with a neutron generator designed to confirm a presence of water at the Moon’s high latitudes, most likely within the still unsampled 4 billion-year-old South Pole-Aitken (SPA) impact basin.

India’s flag-carrying Moon Impact Probe (MIP), deployed from Chandrayaan-1 in November 2008, appears to have directly detected water in vapor form imoments before its intentional impact near Shackleton crater and the Moon’s south pole.

Chandrayaan-1 was launched by the Indian Space Research Organisation (ISRO) October 22, 2008 and inserted into a polar orbit around the Moon the following November 12.

India's first lunar orbiter completed 3,400 revolutions during 312 days, until all contact was abruptly lost, May 19, 2009. The Moon Impact Probe (MIP) separated from the larger vehicle and soon afterward impacted near Shackleton crater at the Moon's South Pole, not long after Chandrayaan was successfully inserted into lunar orbit.

In 2013, the Indo-Russian Chandrayaan-2 / Luna-Resource (ISRO/Roscosmos) 1,000 kg lunar payload is slated for launch from Sriharikota on the sub-continent’s eastern coast. The six-wheeled ISRO rover, accompanying the Russian lander, is expected to weigh 58 kg.

The Indian rover is designed to operate for a year, traveling 150 kilometers at speeds of 300 meters per (Earth) day, primarily powered by solar energy and juggling the incidence of almost continuous sunlight in and around permanently shadowed regions (PSR's) near the lunar South Pole.

In 2012, the Russian lunar orbiter mission Luna-Glob is being developed to carry four Japan-built impactor-seismographer probes.

The Hindustan Times quotes Yevgeny Bogolyubov, deputy chief designer at All-Russian Scientific Research Institute of Automation (VNIIA), confirming Roscosmos plans "to send to the Moon (Luna Resource) bearing a neutron generator developed by our institute to study the lunar surface.” A similar neutron generator would, he said, eventually be used to study the surface of Mars.

The Press Trust of India reports a "short listing" of instruments to be carried on the Chandrayaan-2 orbiter and rover vehicles launched together with Luna-Resource were to be selected in Bangalore on August 3.

Wow, that thing seems a bit clumsy... Is it realy going to be as on the picture?

Not quite. For example, we had too little time to add the lengthy shadows we should expect on the Moon, more especially near the Poles.

Seriously, the draw is just a quick sketch, but loosely based on what few profiles of the lander/rover design that we've seen. The big differences (aside from shadow) are a lander propellant tank, which might make for only a one to three-way rover departure design, and what looks like a remote manipulator arm.

I guess such a robotic are could be stowed like the solar panels! Yeah, that's the ticket!

Actually, the lander/rover scale, in fact the whole notional fantasy drawing altogether, is nothing like we've come to expect from NASA, in recent years!

Because we've seen so few real concept drawings of this awkwardly named hybrid-mission, we decided to sketch out, as I wrote, just a quick sketch hopefully we will improve on later.