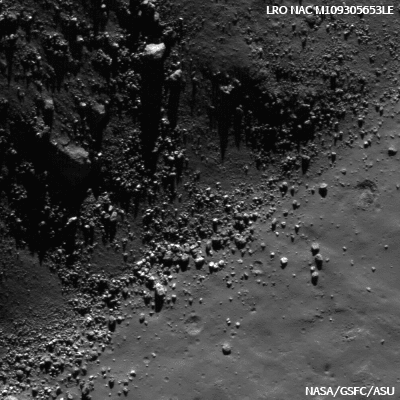 Many boulders lie at the bottom of steep slopes on the floor of Rutherfurd crater (45 km diameter).

Most were probably dislodged by quakes caused by nearby impacts and they simply rolled to the floor. Several LROC images have shown the importance of boulders that roll from high places, as they offer explorers the chance to sample material from far above without climbing mountains. However, many LROC images have shown that boulders are commonly found perched on topographic highs, both on small mounds and large mountains. They certainly did not roll to these high points -- how did they get there? What can they tell us about the geology of the crater? 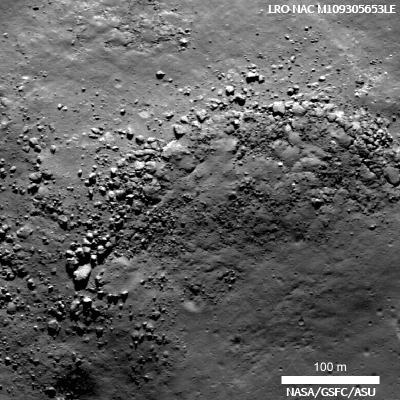 The floor of Rutherfurd crater has many mounds with boulders of all sizes. Were these boulders thrown here from afar or did they form in place? [NASA/GSFC/Arizona State University]

The rubbly boulders shown above may be the remnants of impact melt that temporarily washed over a high mound on the crater floor. As the melt hardened it formed a thin, brittle shell that was later broken by quakes or small impacts. Look closely at the picture and see if there is any evidence to support this hypothesis.

Boulders can also be found by themselves with no apparent source, and they come in all sizes. No matter their source or size, they will prove useful for future astronauts as they explore the Moon -- from rocks come truth. 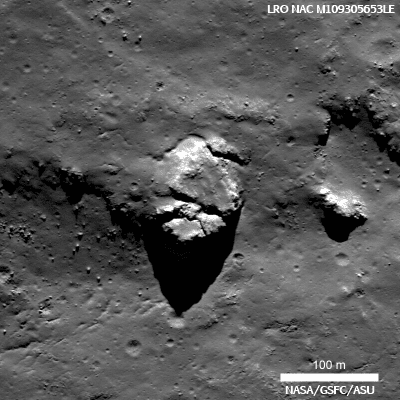 A very large boulder - 100 meters by 80 meters. Where did it come from, and how old is it? [NASA/GSFC/Arizona State University]

Rutherfurd crater has an amazing array of geologic features, browse the whole NAC image and see if you can unravel the history of the boulders and what they tell you about the local geology.
Posted by Joel Raupe at 2:28 AM