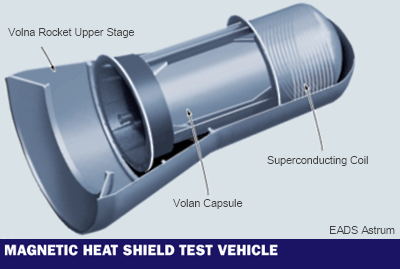 European space agencies and an aerospace giant are developing a new re-entry heat shield that will use superconductor magnets to generate a magnetic field strong enough to deflect the superhot plasma formed during re-entry of returning spacecraft. They plan to test the new technology by attaching a test module to a missile and using a Russian submarine to fire it into space.

As spacecraft re-enter the Earth's atmosphere at high speeds super-hot temperatures are produced through friction. Traditional heat shields use temperature-resistant ablative coatings that burn off on re-entry, or tough insulating materials, such as the tiles used on the space shuttle. If the new magnetic shielding is successful it could be more reliable and make the craft lighter and easier to re-use, since it would reduce or eliminate the need for other shielding materials.

The project is being run cooperatively by the European Space Agency, EADS Astrium, and the German aerospace center, DLR (Deutschen Zentrums for Luft- und Raumfahrt). The idea is to use a superconducting coil at front of the craft to generate a strong magnetic field projecting beyond the front of the craft.

The scientists are currently assessing the superconducting coil's performance, and have not yet finalized the technical details of exactly how they will fit it into a Russian "Volan" escape capsule for the test. Also uncertain at this stage are the modifications that will be needed to the trajectory to compensate for the deflected air. Telemetry data recovery will also present challenges because the ionized gases that will form around the craft will block radio signals.

The Volan and its magnetic heat shield would be launched into a suborbital trajectory from a Russian submarine at sea. The missile, a modified ballistic missile called Volna, would re-enter the Earth's atmospher at Mach 21 and come back to Earth in the Kamchatka peninsula, a remote region of the Russian Far East.

Detlev Konigorski of EADS Astrim, speaking in Manchester last month at the 2009 European air and space conference, said he expected the test to take place three years after it is approved, and that should be some time in the next decade.