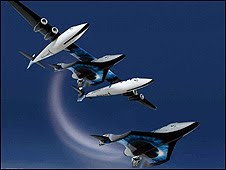 BBC - A change in the law is needed before Scotland can be considered as a launch site for commercial space flights, the head of Virgin Galactic has said.

The firm's president Will Whitehorn said locations in Scotland and Sweden were being considered as bases for Virgin's European operations.

But he said UK laws would have to be amended to allow flights to take place.

Follow the story, HERE.
Posted by Joel Raupe at 6:53 AM