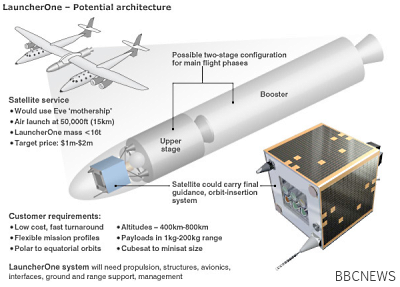 You are going to hear a lot in the next few weeks about Virgin Galactic, not least because on 7 December the company will unveil SpaceShipTwo in the Mojave Desert, California.

I want to concentrate on another Galactic project which is now gathering pace - the LauncherOne satellite system.

Back in January, I reported on early discussions between the Branson outfit and Surrey Satellite Technology Limited (SSTL) in Guildford.

SSTL is a world leader in the production of low-cost small satellites, and it was keen to explore the possibility of working with Virgin Galactic on a way to get these spacecraft into orbit much more cheaply than is currently possible.

The concept would be somewhat similar to the US Pegasus system, which uses a former airliner to lift a booster to 40,000ft, before releasing it to make its own way into space.

Virgin Galactic's aim is to provide an air-launched system which is faster, cheaper, and more flexible.

It would use SpaceShipTwo's mothership, "Eve", as the launch platform.

“SpaceShipTwo will be unveiled after darkness has fallen over the Mojave Desert to the sound of a space-themed anthem from Britain’s biggest DJs, Above & Beyond. Fittingly titled “Buzz” the track will sample Buzz Aldrin’s original moon landing dialogue. Following the naming by Governors Richardson and Schwarzenegger, the DJs will also perform an exclusive set at the celebration cocktail party which will follow and feature the first ever IceBar in the desert hosted by Absolut and the world famous Swedish IceHotel. All the guests will be protected from the desert cold by designer space jackets supplied by PUMA. Finally, to close off the celebrations, all the guests will have the opportunity to view the stunning night skies using specialist telescopes supplied by Ron Dantowitz of the Clay Observatory whose unique tracking cameras followed SS1 into space during the epic flights of 2004.”
http://www.zimbio.com/Sir+Richard+Branson/articles/6Oa9PZL7ymz/Virgin+Galactic+SpaceShipTwo+1st+Commercial

“Cyrus is also working on an album of her own, which she said will be out later this summer.”
http://www.mtv.com/movies/news/articles/1633359/story.jhtml

The royalties won't pay for air
Much less a berth, a bite to eat—
I've waited long to touch your hair,
To paint the nails on pretty feet

Since puberty. I've thought of you...
I'm sorry does that make you shy?
I'm lonely. Since the earth's been through,
I've cursed this metal in the sky.

Celebrities like you survived
To love your fans (for price, by bit);
Though true on earth, with wealth you thrived,
In space you live by famous slit.

Your wealth on earth is molten slag
In space, your skills? They have no use.
On earth they might have let you drag
Them down, but here you'd best be loose.

Your refuge is our prison now
And servant's master, switching bows;
Now act as if it's Oscar-night
And come to me for Tantric-rites.