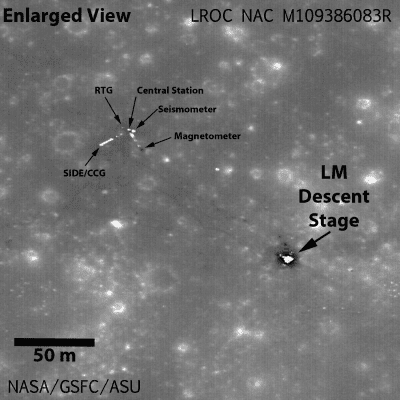 The LROC team released their first view of the Apollo 12 landing site earlier this year. Even though that image was collected from the higher LRO commissioning phase orbit, details of the landing site could be discerned, including the trails followed by Astronauts Charles Conrad and Alan Bean, the descent module of the Lunar Module (LM) Intrepid, and the Surveyor 3 robotic lander.

From the lower mapping orbit (50 km) even more details of the landing site are revealed. With the Sun very high in the sky (incidence angle 4°), shadows are minimized and you mostly see variations in albedo (or surface brightness). On the Moon, albedo variations are generally due to either composition (mare vs highlands) or maturity (since fresh, impact-excavated lunar materials tend to have higher albedo, but gradually darken after prolonged exposure to the space environment). Since we're viewing a mare surface far away from highland materials in this image, the albedo variations that you can see are dominantly due to maturity effects. However it is clear from all of the LROC landing site images that astronaut activity lowers the albedo, since areas of heaviest activity have the lowest albedo, especially around the LM. This effect is most likely due to compaction of a very loose surface powder by simply walking around. The more walking in a given area, the more compaction that takes place, and thus the lower the albedo.

At the beginning of the first extravehicular activities (EVA) the astronauts learned to walk in 1/6 gravity, unloaded equipment, and setup the camera and flag resulting in a high traffic area that can now be seen from orbit as a low albedo halo surrounding the LM.

Can you find the Intrepid and the Surveyor 3 in the full LRO Narrow Angle Camera (NAC) frame?
Posted by Joel Raupe at 4:05 AM