The Rosetta Stone of the Solar System 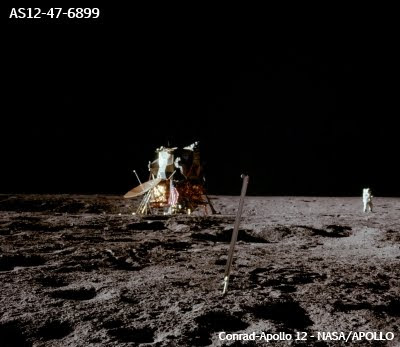 The Ocean of Storms, November 19, 1969. Minutes into the first of two EVAs, Apollo 12 lunar module pilot Alan Bean is photographed by Pete Conrad, the fourth and third human beings to walk on another world [NASA].

AFP - The moon, which is once again the focus of an international space race, could hold the key to the birth of our planet some 4.5 billion years ago, and help unlock the oldest secrets of the universe.

Forty years after American Neil Armstrong first walked on the moon, and as the United States aims to return astronauts to Earth's nearest neighbor by 2020, it remains an object of fascination and curiosity.

Friday's announcement that the US space agency has found "a significant amount" of water frozen water deep in the moon's surface will re-ignite mankind's dreams of colonizing Earth's only satellite.

"The moon still has a great deal of scientific information left to be discovered that relates directly to... our understanding of the history of the Earth and early history of other planets," geologist Harrison Schmitt told AFP earlier this year.

Schmitt landed on the moon in 1972 aboard the Apollo 17, the last manned mission to touch down on the lunar surface. He is among an elite group of 12 Americans who are the only people to have walked on the moon to date.

And as the Earth's natural resources gradually dwindle, some scientists believe the moon could prove a goldmine for future generations.

Among the 382 kilos (842 pounds) of rocks and lunar soil brought back by astronauts from the moon during six Apollo missions is a rock that scientists call "genesis," which dates back to around 4.5 million years ago, about the time when the solar system began.

The moon, which has virtually no atmosphere, is effectively a geological blank slate for scientists because it has not had the contact with water and air that has changed the Earth's surface.

"One reason to go back to the moon is to find out whether there is anything of value to be done there... If the answer is yes, you can do economically valuable things and use local resources," said John Logsdon, a curator at Washington's National Air and Space Museum.

America's new lunar program, dubbed Constellation, was launched in 2004 with the intention of establishing a forward operating station for astronauts as well as to seek evidence of water beneath the moon's ground ice.

President Barack Obama has appointed a commission to review the program's cost and goals. And several other countries, including China and Russia, have announced their ambitions to send missions to the moon, about a four-day trip by space shuttle from Earth.

Schmitt, a former astronaut, noted the moon's soil is rich in helium-3, which comes from the outer layer of the sun and is blown around the solar system by solar winds.

The element is rarely found on Earth, unlike on the moon, where it is heavily accumulated because it is pushed away by the Earth's magnetic poles.

Helium-3 is highly sought for nuclear fusion, and though the technology is still in its infancy, the element "will ultimately be quite valuable on Earth," Schmitt said.

Reserves of helium-3 on the moon are in the order of a million tons, according to some estimates, and just 25 tons could potentially serve to power the European Union and United States for a year.

The moon is also an ideal location for astronauts to prepare and train for long missions into space, including to Mars, according to NASA.
Posted by Joel Raupe at 4:41 AM