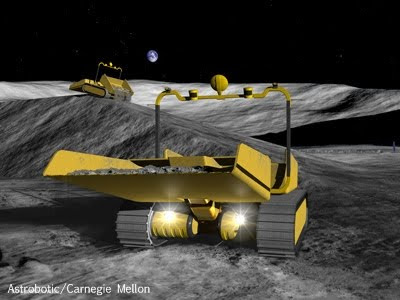 Lightweight excavation robots are key to recovering the water and hydrocarbon deposits at the Moon's poles, which will enable explorers to "live off the land" rather than hauling all their supplies from Earth at great expense. New results from NASA probes released last week show that the water content in the polar soil is 10 to 30 times richer than previously thought, and in easier-to-access places than the floors of deep craters.

"We intend our robots to be prospectors for water and hydrocarbon resources, and then to demonstrate how they can be turned into rocket propellant and life support supplies," said Dr. William "Red" Whittaker, founder of Astrobotic Technology and a research professor at the university's Robotics Institute. "Creating propellant at the Moon will halve the cost of lunar exploration and advance the date when we can send human expeditions to Mars."

Excavation is expected to be required to remove a top layer of dry soil covering ices deposited by comet and asteroid impacts.

The lunar gravity simulation study will examine the best ways to mimic the effects of the one-sixth lunar gravity via various active and passive gravity-offload mechanisms and ways to make the apparatus scaleable and transportable for field tests in challenging terrain.

Astrobotic Technology Inc. is a Carnegie Mellon spin-off that will fund a series of robotic Moon missions, first winning the $20 million Google prize and visiting Apollo 11 on the "Tranquility Trek" expedition in late 2011. The Trek robot will be a rolling TV studio and Internet node, sending back high-definition video of its adventures. Later missions will prospect for water ice in deep polar craters and seek out volcanic caves as low-cost shelters for both robots and astronauts.