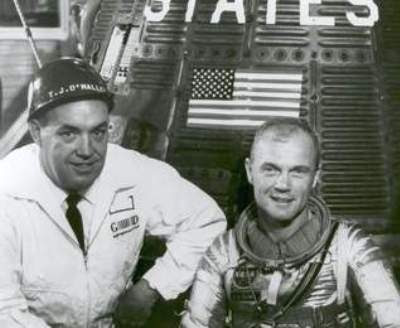 O’Malley displayed the button in the den of his Cocoa Beach home.

Daughter Kathleen O’Malley said the conversation between Glenn and her dad on Friday was brief, but she related hearing O’Malley say “Hello, John Glenn” to the space pioneer.

O’Malley was called to the human spaceflight program in 1961, while working for the Convair division of General Dynamics, where he was a test engineer for the Atlas intercontinental ballistic missile, according to family historian Cornelia Dean, O’Malley’s niece. The Atlas had experienced a series of launch pad explosions.