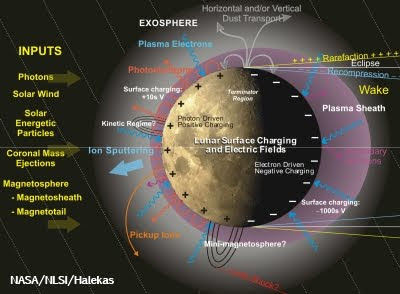 The Dynamic Lunar Exosphere in a schematic that should be attributed to Jasper Halekas. Since its true dynamism was first hinted at, in the televised nightside "horizon glow" images returned by Surveyor VII, through the Apollo landings at its first direct detection, through a renewed interest in the lunar exosphere as a driving force (with its own hydrology) the Moon's atmosphere has been demonstrated to be an exceptionally dusty phenomena. Mitigation of its effects on personnel and equipment is a top priority before extended human activity on the Moon can begin.

A set of original NASA data tapes from moon landings in the 1960's now held in Western Australia may hold the keys to overcoming problems associated with the effects of lunar dust on future moon missions.

The 177 original (or primary) data tapes – most likely the only tapes of their kind in the world – contain the results of experiments using dust detectors on the surface of the moon by Apollo 11, 12 and 14 astronauts. They have been recently supplemented by secondary data from Apollo 12, 14 and 15 missions.

The experiments involving the Apollo landings were conceived and designed by Australian space scientist and physicist, Professor Brian O'Brien. He says the data on tapes were never fully analysed and are the only such dust measurements during the six Apollo missions.

“This is extremely important information for engineers and scientists planning future lunar missions,” says Professor O’Brien. “For instance, I’m sure we can read the Apollo 11 tapes now much better than we could in 1969.”

Professor O'Brien, 75, was Professor of Space Science at Rice University in the US in the 1960s. He now lives in Perth and is an Adjunct Professor in The University of Western Australia's School of Physics.

Professor O’Brien’s unique lunar dust data and the data tapes he has been instrumental in preserving are the subjects of two proposals for funding.

The University of Western Australia and the Perth-based company SpectrumData are applying for an Australian Research Council (ARC) Linkage Grant, to develop world-class tape readers that will optimise further reading of the tapes, particularly of the very noisy yet most historic Apollo 11 tapes.

As well as this, Professor O’Brien and The University of Western Australia are applying for Round 1 funding under the recently announced Australia Space Research Program.

Professor O’Brien believes analysing the dust data tapes will help give Australia unique global expertise and provide “early runs on the board” in its space research efforts.

He says the tapes are of international significance, especially since the US, Russia, China, Japan, India and the European Union are all undertaking lunar projects. He says it is likely to be a decade or more before such countries could carry out experiments involving the effects of lunar dust on human and robotic activities on the troublesome dust-covered lunar surface.

Professor O’Brien says lunar dust is considered the number one environmental problem on the moon and can cause unexpected difficulties and hazards for both robots and humans operating on the dust-covered lunar surface.

The measurements by Prof O’Brien’s invention are the first comprehensive research analyses of the only quantitative, direct and active lunar-surface measurements of this problem.

Professor O’Brien’s tapes were stored in Perth for many years until he retrieved them after NASA confirmed three years ago that it had misplaced its copies. Until recently, Professor O’Brien believed there were no other copies of the dust data.

However, after a chance meeting in July 2009 with a retired engineer in the United States, he learned that there was another copy of the dust experiment data embedded in tapes of Apollo seismic data read and archived by Professor Yosio Nakamura. Professor Nakamura is a 75-year-old seismologist working with the University of Texas, and was a team member on the Passive Seismometer Experiments on Apollo missions.

Professor O’Brien has since obtained a copy of Professor Nakamura’s readings of the tapes, and will use them to complement his own data.

He says Apollo astronauts faced major difficulties with clinging lunar dust during their early morning moon walks, and believes his tapes contain much valuable data which needs to be analysed using modern technology.

Lunar dust is very fine – almost like talcum powder – with particles as small as 20 microns, far less than a human hair width. It is also very ‘sticky’, depending on the time of the day.

The Apollo dust detectors invented by Professor O’Brien weighed only 270 grams, and were about the size of a matchbox. A minimalist design, they contained three small solar cells, which gave differing voltage readings according to how much dust was present, thus affecting the amount of sunlight falling on the cells.

The dust detectors were attached to equipment on the lunar surface outside the Apollo craft, and are especially important because they provide the only direct measurements of spacecraft lift-off conditions and dust clouds caused by rocket exhausts. This can be crucial in determining how close astronauts can leave scientific equipment on the moon without it being adversely affected by dust when spacecraft depart.

“You need to know the physics of what’s happening to the dust, and why it sticks to everything and how its stickiness varies during the lunar day to be able to start to manage it,” Professor O’Brien says.

“Nobody’s ever raised that issue in 40 years despite all the theories about lunar dust, and many, many theoretical studies. Nobody’s even raised the elementary issue of ‘how does it behave during the course of a lunar day?’.

“As a leading NASA administrator said to me in Washington in July, most of your discoveries have raised unexpected questions.”

There are also other concerns, such as unexpected hazards posed as the fine dust clogging up instruments or possible problems if it comes off astronauts’ space suits in their space capsule.

“Then there’s the astronauts’ health,” says Professor O’Brien. “How do you stop the astronauts carrying the dust in when they go into the cabin?”

“The problem is once you leave lunar gravity and enter zero gravity of a capsule, this dust floats everywhere, so inhalation issues can be very important.

“Clearly you want to be able to manage the dust so that you leave it outside and don’t take it in with you.”

He says because of the moon’s unique surface conditions, the findings from his experiments in the 1960s cannot be simulated.

“You cannot simulate in a laboratory all the environmental conditions on the moon: the fierce sunlight, the vacuum, the solar wind, and the electrons and protons from the magnetosphere and the whole plasma (partially ionised gas) environment,” he says.

At his own expense, Professor O’Brien has been revisiting the findings of his Apollo 11 and 12 experiments. Because his original tapes cannot be properly analysed until new data readers are developed, he’s had to rely on the 100 paper charts he first plotted back in 1969.

Although they only contain a fraction of the information available on the tapes, they are still yielding new findings.

In a paper published in May 2009, he pointed out that the lunar dust behaved differently at different times of the day.

He found that the stickiness of the dust and the way it adhered to objects and spacesuits increased as the sun became stronger throughout the 710-hour lunar day.

This means astronauts working on the moon’s surface in the middle of the day are likely to be covered with much more dust than those working in the morning, which is when Apollo astronauts ventured outside.

As a result, he suggests future lunar landings should provide an awning or shed to shield astronauts from the sun and so protect them from dust.

The US is considering returning to the moon to establish a human presence. In 2012, it is due to launch its robotic Lunar Atmosphere and Dust Environment Explorer (LADEE).

“Yet they’ll never get ground truth (baseline data to validate other findings) in time for LADEE, that’s one example,” says Professor O’Brien.

In the past month, Professor O’Brien has also made the first analyses of effects of the ascent of Apollo 14 and 15 Lunar Modules – using Professor Nakamura’s data – to contrast with his earlier discoveries from Apollo 11 and 12. His paper is nearing completion.