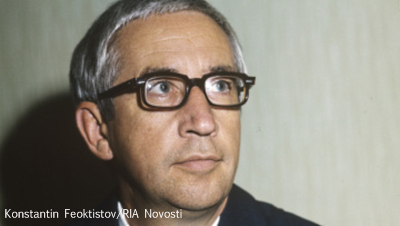 Well-known spaceship designer and one of the Soviet Union's first cosmonauts, Konstantin Feoktistov, has died at 83 in Moscow, the Russian space agency Roscosmos said Sunday.

"We report with regret that Konstantin Feoktistov, a famous Soviet cosmonaut, died in Moscow on Saturday. Information on the funeral service, place and time of the burial will be available later," a Roscosmos spokesman said.

Feoktistov was one of those who designed Soyuz and Progress spaceships, and the Salyut and Mir space stations until 1990. From 1990 he worked as a professor at a Moscow technical university.

A crater on the Moon is named after Feoktistov.
Posted by Joel Raupe at 4:38 AM