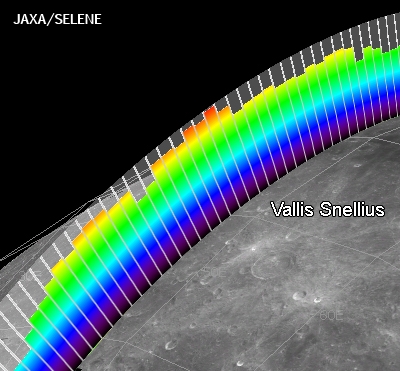 Perhaps the third of the wide variety of lunar magnetic anomalies shown to be sufficient to form a density cavitation in the interplanetary magnetic field. The Moon's crustal magnetism is complex, with local intensities - some are characterized by obvious and relatively bright albedo features without corresponding topography -others without - and some antipodal to basins. Map from Japan's Kaguya (SELENE-1) data, released March 2008 [JAXA].

It was surprising to read reports over the weekend about a "discovery" of a mini-magnetosphere on the Moon, detected by the Sub-kev Atom Reflecting Analyser (SARA) instrument on-board India's Chandrayaan lunar orbiter, earlier this year.

It was particularly surprising when India's Economic Times quoted Dr. Amil Bhardwaj, principal investigator for that experiment, calling this ""first confirmation that prove that mini-magnetosphere can exist with such small magnetic field." (sic)

Something is clearly lost in translation. There is a world of difference between "discovery" and "first confirmation." A "discovery" of intense, local "lunar magnetic anomalies" by the Apollo sub-satellites has led to an interesting debate about their ages and their relationships with the Moon's many bright "swirl" phenomena on its surface, long linked with crustal magnetism.

The discovery of a mini-magnetosphere, a small crustal magnetic field intense enough to form a bowshock in the Sun's magnetic field, like Earth's, diverting the solar wind would come as a shock to Jasper Halekas and his colleagues at U.C. Berkeley who reported their observation of density cavity phenomena "over a strong lunar crustal anomaly in the solar wind" in data collected by the Lunar Prospector mission (1998-1999). They detailed their findings in the Journal of Planetary and Space Science in early 2008, observing traces of a local magnetosphere on the Moon in data collected both when the phenomena was under the Sun and when it was inside the Moon's wake, at night, as it traveled with the Moon through the Interplanetary Magnetic Field.

The translation in the Economic Times puts the "discovery" into the mouth of Dr. Bhardwaj, and "confirmation" into his direct quote. But there's still a need for a clarification, and that would not detract anything of the accomplishment of India's first lunar satellite which has other firsts and confirmations to its credit.

What may be more interesting is the hint given in the Economic Times that Dr. Bhardwaj tied the existence of a local "mini" magnetosphere in the Moon's upper crust to the prevalence of hydrogen, saying such phenomena may lead to re-estimates of how much hydrogen exists on the Moon's surface. Reading a translated news story is an excellent way to illustrate the importance of being careful not to jump to conclusions when reading first hand accounts written by those with a weak understanding of a topic.

Dr. Lon Hood, and a long list of scientists over the years, have puzzled over the Moon's lunar magnetic anomalies. Analysis of magnetometer and other Lunar Prospector data led to the discovery of magnetic fields over the diffuse bright surface feature over the Descartes Formation, immediately southeast of the landing site of Apollo 16, and helped identify a "mid-range" swirl with the magnetic field centered over nearby Airy crater. A magnetic field over Reiner Gamma, only seven degrees north of the equator, has long been observed, though each of these Near Side magnetic fields and the swirls are very different than the better known counterparts on the Far Side.

The famous swirl phenomena in southwestern Mare Ingenii is coincident with a strong crustal magnetism and is very obviously directly opposite from the Imbrium basin. A mini-magnetosphere is thought to exist near Gerasimovich, on the opposite side of the Moon from Crisium, and a wide-spread and complicated field of swirls can be found opposite Orientale, and so forth. It's important to note the existence of swirls with magnetic fields don't necessarily mean that local magnetism is intense enough to form a density cavity.

A mini-magnetosphere was proposed over Descartes in 2001, but the swirl pattern under the magnetic field centered on the northern rim of battered Descartes does not appear to be on the opposing side of the Moon from any basin-forming impact (yet).

Since evidence for a lunar "dynamic exosphere," perhaps even a "lunar hydrology, seems to be coming into focus, with Cassini and Chandrayaan observations of what appears to be neutral hydrogen in the solar wind bonding with oxygen in lunar rocks, forming water and hydroxyl, it will be interesting to see if the SARA team has found a solution to the mystery of how the swirl patterns under magnetic fields at Descartes, Mare Ingenii and Gerasimovich have managed avoid the darkening (optical maturity, or OMAT) that seems to be unavoidable over periods of more than 900 million years. A mini-magnetosphere might shield the surface underneath from the ceaseless bombardment of protons in the solar wind, but are not sufficient to shield those areas from higher energy cosmic rays and bombardment from micrometeorites.

Imbrium basin, opposite from Mare Ingenii (which is probably younger), is believed to be 3,800 million year old.

If they have tied this together with the formation of water molecules under the sun, it's likely to be tied together with dust transport. My colleague Larry Scott and I proposed one solution to the "longevity of low optical maturity" in 2008, setting out the notion that the submicron dust charging and levitation away from the Moon's surface believed to be part of the daily cycle on the Moon is prevented from falling back out onto the surface under these swirl-related crustal magnetic fields, keeping the area always presenting a bright, fresh face.

Whoever is properly credited with understanding the new "dynamic" Moon, it's an exciting time for the real scientists who've spent ten years interpreting the data returned by Lunar Prospector.

Each of the latest lunar orbiters since 2007, including NASA's LCROSS and the sole survivor, the Lunar Reconnaissance Orbiter (LRO), were directly inspired by the earlier mission In January 1999 the remarkably low-cost mission ended with with an impact in a permanently dark crater near the Moon's south pole later named for Eugene Shoemaker (1928-1997) whose ashes were on-board .

It must be a little confusing to the casual observer, however.

A short time before the LCROSS impact, as headlines incorrectly shouted about NASA's decision to "bomb the Moon," the agency held a press conference to announce the discovery of water on the Moon, thinly spread out under full daylight and closer to the equator, detected first by Cassini and confirmed by India's Chandrayaan-I.

Then, after long preparation, came the impact of LCROSS on October 9, but with no spectacular pictures immediately available showing the plume, headline writers dismissed the experiment as an expensive and meaningless "dud."

A month and three days after the impact the LCROSS team had accumulated enough evidence to announce preliminary findings. After years of hedging bets, trying hard neither to jump to conclusions or to risk disappointment, the LCROSS experiment appears to have demonstrated that at large part of the hydrogen Lunar Prospector detected in the Moon's polar regions must be bound with oxygen to form frozen water.

There are sound theories, but still no direct evidence, tying the trace water detected by Chandrayaan at lower latitudes with the chunky water collected in the very, very Cold Traps inside permanently darkened craters near the Moon's poles. But these two announcements, barely a month a apart, of the discovery of water on the Moon are phenomena separated by the distance between Bangalore and Mountain View. 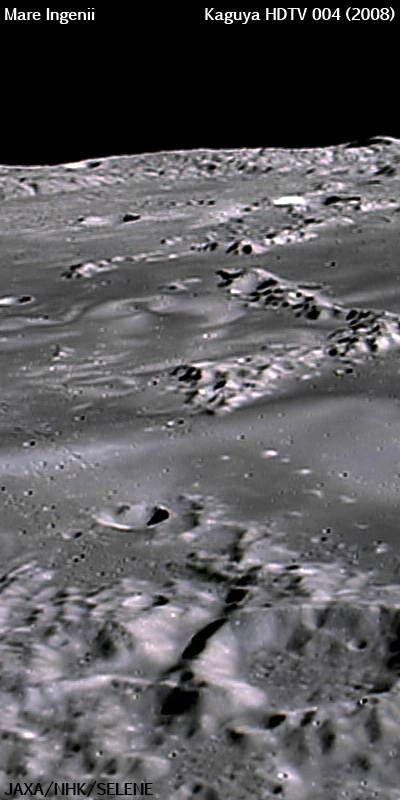 The enigmatic swirls of Mare Ingenii, perpetually fresh under the magnetic field centered in the mountains closer to the horizon, a point directly opposite from the epoch-shattering, basin-forming impact that made Mare Imbrium. Lunar magnetic anomalies, crustal magnetism, is long associated with "low optical maturity," areas on directly on the Moon's surface that resist the darkening that marks newer, less space weathered materials from older, more battered craters. At least two mini-magnetospheres have been associated with the bright albedo at Descartes and the relatively intense magnetic field near Gerasimovich, opposite Mare Crisium. Not all surface magnetism, with associated swirls, appear to be sufficient to ward off solar wind [JAXA/NHK/SELENE].
Posted by Joel Raupe at 12:22 AM

Joel-
Agree that "discoveries" of known things seems to be epidemic, both for Mars and lunar missions. Is it a lack of knowledge of history or an uncritical exuberance at success?
Chuck Wood

Probably a little of both, Chuck. I really do hope something's been lost in translation. Though, I suspect the startling lack of any knowledge of history which plays the biggest role. And, by the way, we're honored you stopped by! - Joel R.