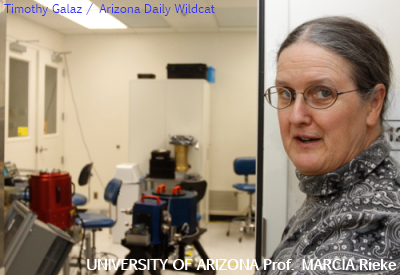 Marcia Rieke, an Astronomy Professor at the University of Arizona, shows some of the plans for the James Web Space Telescope and the 'clean room' lab where the light sensors for the telescope are tested at nearly negative 240 degrees Centigrade. Reike will be speaking at about the telescope during SpaceVision 2009, the largest fully student-run space conference in the nation.

SpaceVision 2009, the largest fully student-run space conference in the nation, will take place at the UA, Nov. 12-15.

The UA chapter of the Students for the Exploration and Development of Space club submitted a bid to host the conference at last years conference at Texas A&M, said Joshua Nelson, chairman of the club’s national organization and a recent UA aerospace engineering graduate.

“It’s our organization’s national conference so each chapter voted and we got elected,” Nelson said.

Planning for the event began immediately and 60-member space club is prepared for this weekend, Nelson said.

“We want the public to understand that there’s more to space than NASA,” said Kyle Stephens, president of the UA’s club and conference organizer.

Organizers say they expect close to 200 people to attend the event and are on track to get that number.

Read the story HERE.
Posted by Joel Raupe at 7:04 PM