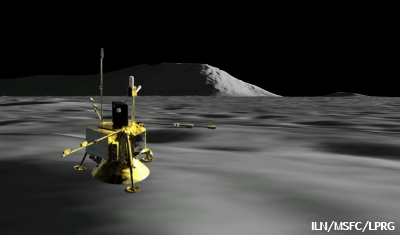 The heat-flow probe directly addresses the goal of the Lunar Geophysical Network, which is to understand the interior structure and composition of the Moon. The International Lunar Network (ILN) is a near-term mission that requires a heat-flow probe. ILN is a set of four small landers, scheduled for launch in the 2016-2018 time frame, that will deploy up to four instruments. The ILN payload is limited to ~25kg and its power will most likely be provided by a ASRGs.

To place 1kg on the surface of the Moon costs ~$50k to$100k. Thus, any scientific instruments must be efficient with respect to limited spacecraft resources such as mass, power, and volume without compromising on quality scientific measurements.

A key challenge for a heat-flow probe will be getting to a 3m depth at which the endogenic thermal gradient can be measured, i.e. below the depth of penetration of the annual thermal wave, within ILN Payload limitations. The Apollo 17 two heat flow probes reached 2.4m. A heat flow probe must create a minimal disturbance to the thermal environment.

We have been developing two highly innovative low mass and low power heat-flow probe systems (robotic, but can be also astronaut deployable). Each system consists of two parts: 1) a method of reaching 3m depth in lunar regolith, and 2) a method of deploying thermal sensors.

Percussive System: The first system uses a percussive (hammer-like) approach to drive a small diameter (20mm) cone penetrometer to >3 meter depth (Figure 1). Ring-like thermal sensors on the penetrometer rod (heaters and temperature sensors) are deployed into the regolith every 30 cm as the penetrometer goes down to 3 m. The penetration rate of the percussive penetrometer can be correlated to regolith density; this added measurement will help with thermal conductivity correlation.

The system leaves only small sensors in the borehole. The deployment rod is removed once depth is reached, maximizing measurement sensitivity by eliminating thermal path to lander except for the electrical tether.

Should spacecraft helium not be available, a simple gas delivery system may be added specifically for the heat flow probe. Honeybee demonstrated that 1 gram of N2 at 5 psia can lift 6000g of JSC-1a in lunar conditions (vacuum, 1/6g) Thus, a only a small amount of gas would be required to penetrate to 3 m. 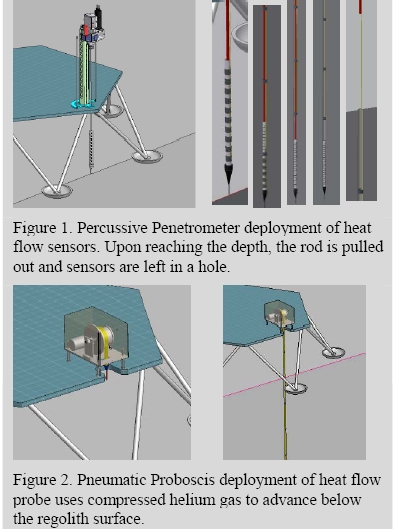