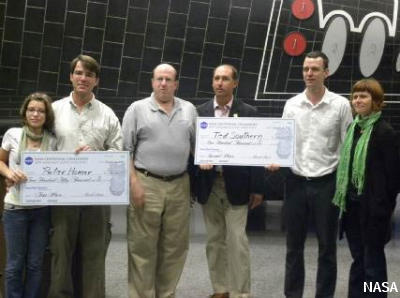 An aerospace engineer from Maine, the reigning champion of NASA's Astronaut Glove Challenge, held onto his title Thursday to win first prize in a competition to build a better space glove than those worn by astronauts today.

The winner, Peter Homer of Southwest Harbor, Maine, took home $250,000, top prize at the competition held at the Astronaut Hall of Fame in Titusville, Fla., close to NASA's Kennedy Space Center. It was the second win for Homer, who took home first place, and $200,000, in the first-ever Astronaut Glove Challenge in 2007.

"It was a close decision. Both met all requirements," said Andy Petro, manager of NASA's Centennial Challenges program, which oversees the competition.

The full story HERE.
Posted by Joel Raupe at 9:30 PM