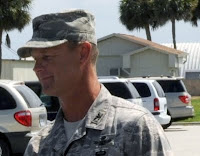 He will serve as the director of Mission Assurance and Integration and will also handle Florida external relations, assisting with state and local governmental, customer and media relations. Henderson will primarily support former astronaut Ken Bowersox, vice president of SpaceX's Astronaut Safety and Mission Assurance office, working out of the company's Florida office.
Henderson joins SpaceX after 25 years in the United States Air Force (USAF), an experience that began by earning a degree in Astronautical Engineering from the U.S. Air Force Academy. His prestigious career in the USAF included assignments in a wide variety of high level space operations and acquisition positions. A certified acquisition professional, Henderson has also earned a masters degree in Engineering Management from the Florida Institute of Technology and was a National Defense Fellow at the Massachusetts Institute of Technology.

Prior to SpaceX, Henderson held the position of Commander with the 45th Launch Group at the Cape Canaveral Air Force Station (CCAFS) in Florida. His responsibilities in this position focused on Department of Defense (DoD), civil and commercial space launch-related activities. Henderson joins SpaceX just as the company is preparing for the first Falcon 9 launch from CCAFS.

"Scott Henderson brings a great deal of operational launch experience and technical expertise to our company," said Bowersox. "As we begin the first flights of the Falcon 9/Dragon system, Henderson will serve as a critical link between the SpaceX Safety, Mission Assurance, Operations and Integration teams."
Posted by Joel Raupe at 8:40 PM