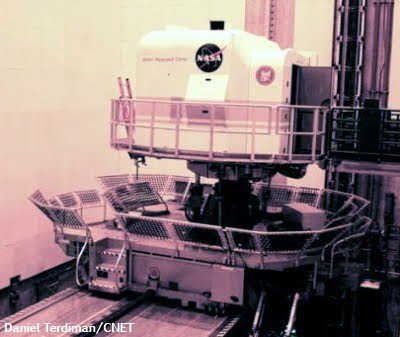 NASA Ames' Vertical Motion Simulator, the largest-such simulator in the world, has been used since 1980 to help train pilots to fly helicopters, fighters, and space shuttles. Now, it is being used for training on the next-generation lunar lander.

Mountain View --There I was, staking my claim to a pilot's slot in one of NASA's next-generation lunar landers, and to be perfectly frank, I think I'd better not quit my day job.

"I think we probably walked away from that," said NASA aerospace engineer Eric Mueller, after one rough touchdown. It was an overly charitable assessment of my performance. I'd hate to know what he was really thinking.
Read the story HERE.
Posted by Joel Raupe at 7:46 PM