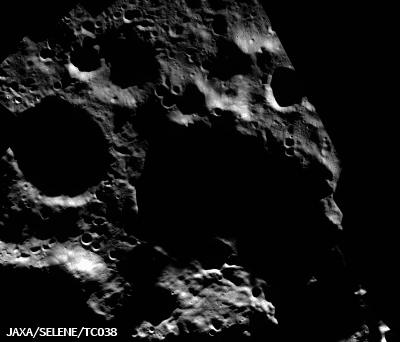 Cabeus (84.9°S, 324.5E) and it's permanent-endarkened interior, whose mysteries were plumbed by LCROSS, Oct. 9. Despite shallow reporting (long since moved on) of a "dud" after an attempt by NASA to "bomb" the Moon, rumors abound of a strange brew whiffed in the resulting plume, including a hint of Mercury. [JAXA/SELENE Terrain Camera].

NASA will hold a news conference Friday to talk about early science results from its successful moon impacting mission, the Lunar CRater Observation and Sensing Satellite (LCROSS). The satellite gained worldwide attention when it plunged into a crater near the moon's south pole on Oct. 9.

For information about the LCROSS mission, visit: http://www.nasa.gov/lcross
Posted by Joel Raupe at 2:16 AM

Very exciting. We've been waiting a decade for these details, to explain what was observed by Lunar Prospector in 1999. It's definitely a New Moon.