High Noon at Tranquility Base 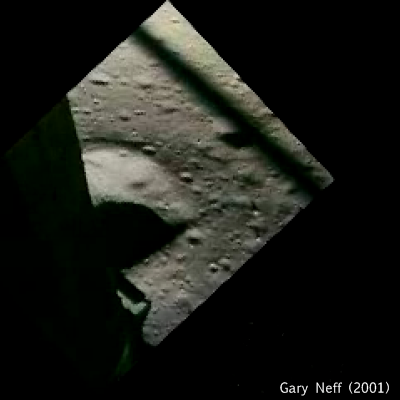 Sixty meters over West Crater Neil Armstrong takes manual control from the automated landing system of the Apollo 11 lunar module "Eagle" because it seemed about to set down within the crater's boulder-strewn interior. The still above from the sequential still camera shows the last moments of slowed forward motion from 1630 meters per second to zero, more than six minutes into Terminal Descent. In the minute that followed, Armstrong hovered west another 500 meters and the rocket-blown path through the dust can easily be seen in the latest high-resolution images (below) just released by the Lunar Reconnaissance Orbiter Camera (LROC) team at Arizona State University. (The still above was lifted from the 16mm landing film and produced by Gary Neff, with source footage courtesy of John Knoll.) "The sequence camera was pointing out Buzz Aldrin's right-hand lunar module window. The Quicktime clip runs approximately from (15,240 meters) altitude down to the lunar surface (- from about GET 102:30:45 to 102:46:38, one minute after touchdown [Apollo 11 Surface Journal]. 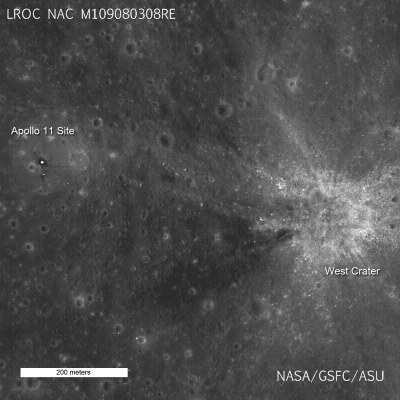 "Houston, Tranquility Base here. The Eagle has landed." 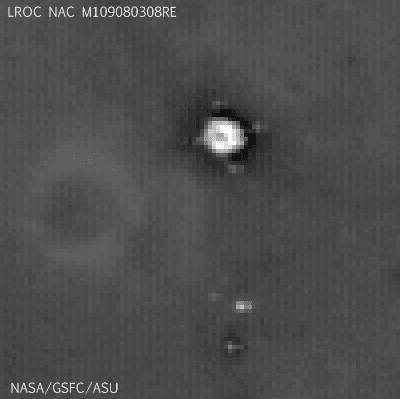 Enlargement of landing site, stretched to enhance details of the lunar module descent stage and EASEP (bottom) [NASA/GSFC/Arizona State University].
With those eight words, astronaut Neil Armstrong let the world know that Apollo 11 had landed safely on the Moon, beginning humankind's first exploration of another world. The landing certainly kept the mission operations crew in suspense as Armstrong maneuvered around the bouldery ejecta on the NE flank of West crater, finally settling down almost a kilometer to the west with only tens of seconds of fuel remaining.
The LROC team earlier released two pictures of the Apollo 11 landing site, each taken under different illumination angles and at lower resolution. This is LROC's first picture of Apollo 11 after LRO dropped into its 50 km mapping orbit. At this altitude, very small details of Tranquility Base can be discerned. The footpads of the LM are clearly discernible, components of the Early Apollo Science Experiments Package (EASEP) are easily seen, boulders from West Crater lying on the surface to the east stand out, and the many small craters that cover the Moon are visible to the southeast. Material on the deck of the descent stage is highly reflective and is more than five times brighter than the mare - too much contrast to be captured in a normal stretch. As a result the deck is saturated, giving it a washed-out appearance. Stretching the image to highlight detail of the LM (above) washes out detail in the mare.
In this enlargement the Passive Seismic Experiment Package (PSEP) can be seen. The dark halo surrounding the PSEP is a result of repeated footsteps of Armstrong & Aldrin as they deployed the instrument and got it fine-tuned. Just north is the Laser Ranging RetroReflector (LRRR), still in use today. The EASEP was a precursor to the more sophisticated Apollo Lunar Science Experiments Package (ALSEP) flown on the rest of the Moon landings.
Go to the the full resolution image and explore Tranquility Base and its surroundings for yourself! 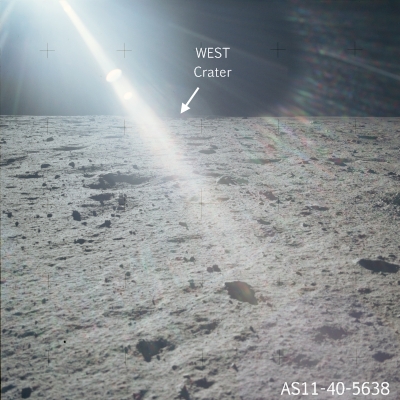 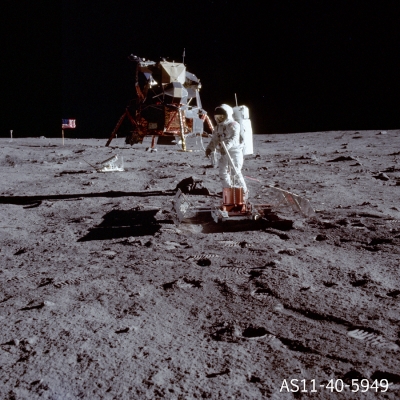 Neil Armstrong took this shot, looking north past the seismometer, laser retroreflector and Buzz Aldrin, a good reference for the detail above, imaged by LRO more than 40 years later. [NASA/GSFC/Arizona State University].
Posted by Joel Raupe at 12:05 AM