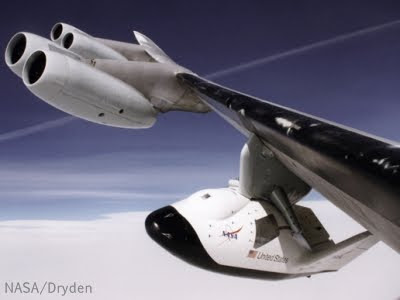 X-38 CRV (Crew Return Vehicle) prototype, built by Scaled Composites (SpaceShipOne) of Mojave, California, as a test-bed in 1998 and soon canceled. Designed as an emergency escape vehicle for the International Space Station, the CRV was itself largely modeled after the X-24 and other reusable lifting body designs tested at NASA Dryden between 1963 and 1975.
Wayne Hale
NASA Blogs

By chance I was in Omaha this week when the news was announced that the X-38 was going on display in the Strategic Air & Space Museum there. What an interesting and out of the way place to display this remarkable device. My work schedule didn't allow me the luxury of a visit to the museum, but then I've seen the X-38 up close before.

Disclaimer: I was a member of an independent review team for the X-38 development for a short period of time.

The X-38 was a tremendously ingenious device lead by a group of talented and unorthodox NASA employees. Their leader, John Muratore, one of the most gifted systems engineers I have ever known. These "pirates" who worked largely free of the typical government space bureaucracy in a skunk works type environment. Free to innovate, free to be highly flexible, co-located with the hardware, they were on the brink of a stunning technological achievement when politics intervened.

The X-38 was a lifting body spacecraft that was to serve as the International Space Station's lifeboat. It was the prototype of the Crew Rescue Vehicle, the CRV. If it had been allowed to succeed, it would have been an alternative to the Russian Soyuz in that role. As a spacecraft it was the potentially evolvable beginning of new space taxis that would have been able to provide alternate ways to get humans to low earth orbit and back. Again, eliminating our sole reliance on the venerable Soyuz, but also providing a way to rotate crews without the Shuttle - which we so desperately needed after Columbia. And the X-38 would have preceded the proposed commercial human launch vehicles by almost a decade.

Unfortunately, new political leadership inside the beltway thought that NASA's only problem was not being able to do our accounting in line with the arcane rules proposed by the OMB. The new political leadership - which by their own admission - knew nothing about the technical aspects of getting into space - needed a scapegoat, an example, something that they could "cut" to show that they were serious about keeping NASA financially in line.

So they picked the brightest star of the future of human spacecraft and killed it with extreme prejudice.

A few years later, in the Columbia Accident Investigation Board Report, Admiral Gehman stated that the failure to replace the Shuttle with something safer was "a failure of national leadership." The cancellation of the X-38 is exhibit A of that failure.

So if you get to Nebraska (Nebraska?!?) go out to the museum and see the nearly flight ready X-38 vehicle there. Think about how the history of the last decade in space exploration might have been different if the mindset inside the DC beltway was focused on achievement instead of ignorantly punishing the most successful. Penny wise and pound foolish.

There are many morals that can be drawn from this history lesson. I leave it as an exercise for the reader to see if you can come to the most obvious conclusions, and how they are still in force today. Nebraska is a really nice state, and Omaha is a really nice town. I appreciate them providing a venue for the X-38.

And if you look up John Muratore, you will find him teaching college students about systems engineering. We need more of that.

Shame on those people who "know the price of everything and the value of nothing."
Posted by Joel Raupe at 7:31 PM