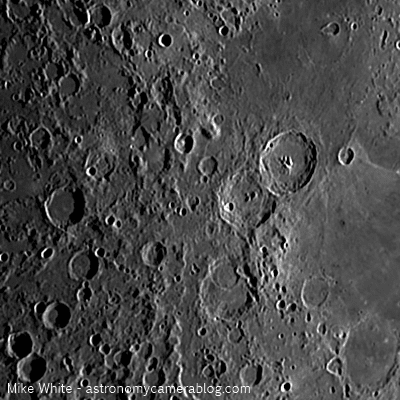 One favorite test of earth-perspective lunar mosaics is the treatment offered of the Descartes Formation, the anomalously bright albedo over the unusual segmented ridges between the landing site of Apollo 16 and Descartes C, north (up) and west of center in the image above.

However you might like to marvel at superior amateur "whole-Moon" mosaics, Xiao Sun has just uploaded two moderately sized examples of work by Mike White at "The Imaging Source," the "Astronomy Cameras Blog" collected early on the morning (UT) of November 7.

The image above is cropped from the 7.5 day-old Moon, showing the rich terrain of the low latitude southern highlands. 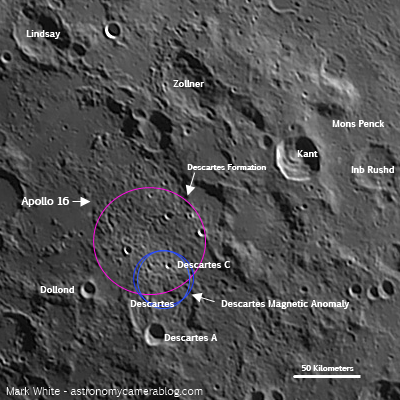 Detail from the second of Mark White's outstanding mosaics showing the general location of the Descartes Formation and the magnetic anomaly associated with southern highland regolith of "low optical maturity," or swirl centered near the north rim of the ancient Descartes crater.
Posted by Joel Raupe at 10:10 PM

Many thanks for the free plug Joel! Nice to know people like my images. I have started my own blog now at http://astronomymike.wordpress.com/ - hope you come visit me sometime. Regards, Mike White