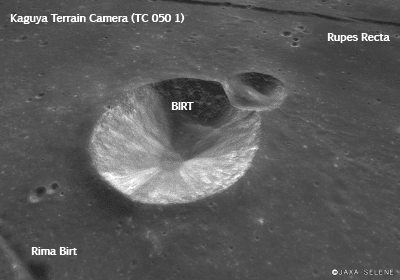 Copernican crater Birt (22.4°S, 351.5°E) as deciphered from data collected by the Terrain Camera on-board Japan's lunar orbiter Kaguya (SELENE-1). A 400 pixel-wide reduction from the original still released November 26.
Hat tip once again to Chuck Wood and his diligent work at Lunar Picture of the Day (LPOD), even to the lengths of keeping tabs on the Japanese language-side of the Kaguya Image Gallery (where public releases usually appear weeks prior to their appearance on the English side).

A few weeks ago I made a valiant effort to rip stills from a Kaguya Terrain Camera survey of the same landmark territory near Rupes Recta, the famous "Strait Wall" among the most familiar features of the Moon's Near Side. This was done by downloading the video of that area posted up to JAXA's channel on YouTube, but the result (while interesting) can't hold a candle to the still JAXA posted to its own site earlier this past week.

Chuck linked to the Kaguya Gallery to his discussion of another of these spectacular new releases HERE.

(All of these latest shots have confirmed my long suspicion that at least one of the three more prominent collapsed "ramps" conveniently positioned along the 114 kilometer long fault line might one day serve as a short cut for ground vehicles moving east and west from the area around Birt to the higher elevation eastward beyond the wall.)
Posted by Joel Raupe at 11:05 PM