Mountains of the Moon 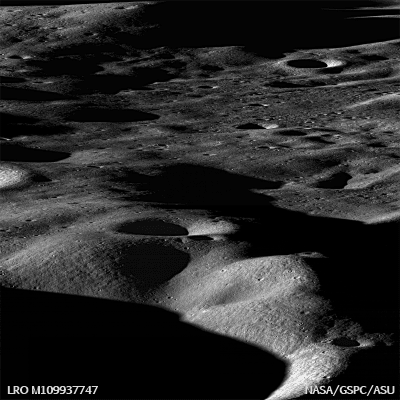 Most mountains on the Earth are formed as plates collide and the crust buckles. Not so for the Moon, where mountains are formed as a result of impacts. Images taken looking across the landscape rather than straight down really bring out topography and help us visualize the lunar landscape. However such images can only be taken as the spacecraft rolls to the side, in this case about 70°, so the opportunities are limited. Foreground is about 15 km wide, view is northeast across the north rim of Cabeus crater [NASA/GSFC/Arizona State University].

Cabeus crater is relatively old, 100 km in diameter, and contains significant areas of permanent shadow. Such regions are of great interest because they may harbor significant deposits of ices (water, methane, etc). Cabeus crater is most famous as the site of the LCROSS Centaur impact (9 October 2009) that was intended to excavate and eject any volatiles that may be in the regolith (what we call the lunar soil). Though analyses of data collected during the impact are still ongoing, preliminary results suggest that yes, significant amounts of water ice may be trapped in these shadowed regions (at least at this one spot).

Two and a half days after the LCROSS impact the LRO spacecraft slewed 70° back towards Cabeus crater to allow LROC to acquire an overview image of a portion of the northern rim. The large mountain (or massif) in the right background (full panorama below) is a portion of the ancient rim of the South Pole-Aitken basin, it rises some 6000 meters (19,685 feet) above the surrounding plains, and more than 9200 meters (30,184 feet) above the floor of Cabeus crater -- taller than any mountain on the Earth. On the Moon mountains are formed in only minutes as huge amounts of energy are released when asteroids and comets slam into the surface at velocities greater than 16 km per second (more than ten times faster than a speeding bullet). In contrast, mountains on the Earth typically form over millions of years during slow-motion collisions of tectonic plates.

Panoramic view looking across the north rim of Cabeus crater from the SW. The distance from left to right is about 75-km and from foreground to background in the center is about 50-km. The LCROSS impact was just off the bottom center of the panorama [NASA/GSFC/Arizona State University].

Future astronauts will see the same view as they descend to the surface for a polar landing. Explore the rim of Cabeus on your own as you plan your landing spot.
Posted by Joel Raupe at 6:29 PM