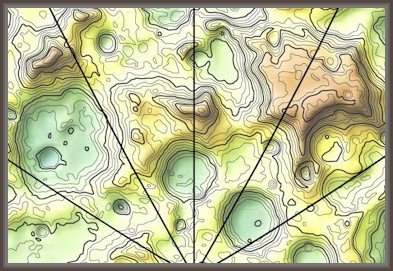 Cropped to a much larger scale, just part of what was "terra incognita" of the lunar South Pole region of the Moon, from Earth's line of sight behind Malapert Mountain (center top, at 86 degrees south), the rim of South Pole Aitken Basin, most of which resides on the Far Side, and Shackleton, where Near Side longitudinal lines converge at 90 degrees South. Among other firsts Japan's first lunar orbiter, Kaguya (SELENE I) mapped the depths of permanently shaded Craters, likely cold traps for scarce volatiles, and even vitually-imaged the interior of Shackleton. All in all JAXA, and the other first-time lunar orbiters of ISRO and CNSA, have set quite an impressive standard for NASA's Lunar Reconassaince Orbiter (LRO) to surpass, after finally beginning its mission next month. JAXA released this astounding third refinement of Kaguya's laser altimeter topography May 28.

Once again I'm in debt to Chuck Wood at Lunar Picture of the Day (LPOD). This time for alerting us to an update to the Kaguya (SELENE) Image Gallery, as always on the Japanese language site weeks before the same updates eventually make it to the English side of JAXA's tantalizing gallery.

It's not another HDTV image. It's a welcome third updated topography formulated from Kaguya's laser altimeter data gathered before its primary mission ended last December.

The first planet wide map was necessarily a little disappointing, of such large scale as to be exacting but of poorer resolution than the famous painted National Geographic wall map first released in March 1970, now hanging on my wall.

The second provided far greater detail and was made available in an appropriately huge .tiff file, ans representing data refined and many millions of data points. It was followed up with different projections showing definitive proof of Japan having located both the Moon's highest and lowest elevations. It's lowest was already known to be within the ancient South Pole-Aitken (SPA) Basin, easily seen affecting the shape of the Moon's backside in beautifully projected clarity. And its highest elevation was not very far away, also on the Far Side, on the rim of Korolev, within a formation that, taken on the whole, might well be part of the outer rim of a "Mega-Basin impact event" predating SPA, perhaps even centered near the northwestern edge of Mare Tranquilitais and larger than the entire Near Side of the Moon.

As excitement grows over the hopefully pending launch of the Lunar Reconnaissance Orbiter (LRO) with its companion mission the LCROSS impactor with its sensing shepherding vehicle, news arrived that JAXA had set a date for deorbitng Kaguya, near Gill Crater on June 10, only a week before an Atlas V carries the LRO/LCROSS bus to orbit and Trans Lunar Injection. to begin their long tours.

This has distracted those of us who regularly check Kaguya's Japanese language Flash Gallery for early releases, but Chuck Wood kept his eye on the Ball. JAXA has now released more laser altimeter data in an even more refined was, enough image and data to require a large Adobe pdf. format.

What a beauty, all 13.8 megabytes of it, layered much like those long available from the Planetary Data System and the Lunar and Planetary Science Institute. It represents even further improvements on what Chuch Wood admits are presently the best topographic maps of the Moon ever made.

Since the end of it primary mission at the end of 2008, after more than a year orbiting the Moon at around 100 kilometers in altitude, Kaguya has been lowered to as close as 15 kilometers in perilune, where JAXA investigators announced hopes to improve on magnetometer data and our understanding of the lunar morphology refinded from the 1998-1999 Lunar Prospector mission, most of it decyphered after that amazing and relatively cheap orbiter was itself "deorbited" ot far from the Moon's South Pole in 1999.

Work by Halekas, Hood, and many, many others have since continued to refine Prospector's returned data and mapped in crustal magnetism, e.g., at Descartes and Gerasimov, sufficiently intense to stand-off solar wind, miniature bowshocks whose longevity, along that of their associated surface albedos, continues to baffle.

Kaguya, like India's Chandrayaan, provided us with a hint of how we can expect data to be delivered from LRO during the next year and beyond.

Corrections and refinements will improve upon early results, after much more work.

Meanwhile, we are also promised real-time availability of HiRes camera imagery, in much the same manner images from Cassini and the rovers Opportunity and Spirit, which should provide for plenty to digest while professionals create the kinds of product that will undoubtedly raise as many question as are answered, and past the life-time of the vehicle, just the camera-less Lunar Prospector continues to surprise, through hard work, a decade after its impact.

Kaguya has refined the long-elusive center of gravity of the Moon down to within two or three meters, and mapped the compex gravity to a resolution never seen.

Kaguya has found, with precision, the lowest elevations (within South Pole Aitken Basin) and the Moon's highest (near on the rim of Korolov) and these are are also pinpointed, on this new map, as are the locations of each of the Apollo landing sites.

In the context of all the other data examine in both Kaguya's and soon LRO's laser altimeter data, that cluster of landing sites is a stark seen as proof of how much of Earth's Moon was left unexplored at the cancelling of Apollo.

Add to the new and skillful refinements to Apollo orbital photography and mini-satellite data being painstakingly restored today, and the exceptional new information being tweeked from the forty-year-old Lunar Orbiter data, it is probably safe to say that, beginning with the humble Prospector the DOD's Clementine sensor experiments, we have learned, and are learning, more about the Moon today than at any time since the Apollo Era.