'The Shuttle's most dangerous mission' 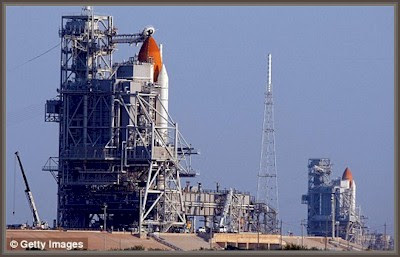 Jacqui Goddard - London Daily-Mail - "It’s a belt-and-suspenders kind of approach," says STS125 Cmdr Scott Altman. "But when your suspenders fail, you’re glad to have the belt. I don’t know if I’ll be breathing comfortably until our wheels stop back at KSC."

Among the greatest hazards facing Atlantis is the intense amount of space junk - such as broken satellites and dead rockets - that is cluttering the area where the shuttle will rendezvous with Hubble.

Shuttle flights usually only go to the International Space Station no more than 250 miles up - but at 350 miles, where Hubble flies, the hazards are far greater.

During five highly risky spacewalks, they will clamber aboard Hubble to repair and replace instruments contained inside, upgrading its capabilities and prolonging its life for another five years.

Without new cameras, gyroscopes and batteries, Hubble will otherwise burn out. But with the space shuttle fleet due to retire next year and its successor not due for completion until at least 2015, this is the last chance to fix its problems.

Astronaut John Grunsfeld likens the intricacy of the tasks he and his colleagues will perform to 'performing brain surgery in space.'

They will face major hurdles, such as unscrewing dozens of minute screws while wearing gloves five layers thick and removing razor-sharp circuit boards capable of piercing the $10 million spacesuits that keep them alive in the vacuum of space.

'I would consider this the climbing Mount Everest of spacewalking missions,' said Mr Grunsfeld, 51.

'In training it’s been going very well…the only hesitation I have is that Hubble has a way of surprising us.'

You could say "Oh it’s going to be a piece of cake, we’ve done this five times" - except on this mission we are going to be repairing instruments that were never designed to be repaired in orbit,' explained Ed Weiler, Nasa’s associate administrator for science missions.

He added: 'This is really going to be tough, the toughest servicing mission we have ever attempted.'

Nasa promises that, if successful, Atlantis’s mission will allow Hubble to once more 'push the boundaries of how deep in space and how far back in time humanity can see.'