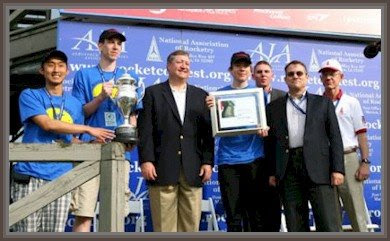 The four-member team won the rocket competition after spending months perfecting their rocket design. The Team America Rocketry Challenge kicked off last September with hundreds of teams from 45 states and the District of Columbia vying for a chance to compete at the finals held today outside of Washington, D.C. with the top 100 teams.

This year, student teams were asked to design, build and launch a model rocket to an altitude of 750 feet with a flight time of 45 seconds and a raw-egg payload situated horizontally to mimic the position of an astronaut. The egg had to return to earth unbroken in order for the launch to qualify.

The contest, sponsored by the Aerospace Industries Association and the National Association of Rocketry, is designed to encourage students to consider careers in aerospace. Great jobs in the field will be abundant as almost 60 percent of the U.S. aerospace workforce is 45 or older and retiring in large numbers, according to AIA statistics.

The winning team will compete today for international glory in a fly-off against the winners of the UK Aerospace Youth Rocketry Challenge from Royal Liberty School in Essex.

AIA President and CEO Marion Blakey said the contest was a great success in achieving its goal of attracting young people to consider careers in aerospace and advancing their studies in the Science, Technology, Engineering and Mathematics, or STEM fields.

“The students today were absolutely outstanding,” Blakey said. “Each and every team demonstrated a superb grasp of the fundamentals of rocketry using physics, math and teamwork to launch their rocket and spur a terrific competition. This is an encouraging sign that there is a promising pipeline of future employees for our industry.”

The Madison West High School team wins a trip to the International Paris Air Show in June, sponsored for the fourth year by Raytheon Company, a major supporter of the competition. The winning team shares a prize pool of more than $60,000 with other top finishers. Lockheed Martin Corporation provides $5,000 scholarships to each of the top three teams, and teams also will receive an invitation from NASA to participate in its Student Launch Initiative, an advanced rocketry program. Other sponsors include the Defense Department, the American Association of Physics Teachers and 34 AIA member companies.

About 7,000 middle and high school students took part in the qualifying rounds of competition. Each team had until April 6 to submit qualifying scores, which were achieved by launching their rockets in their home region under the supervision of a judge from the National Association of Rocketry.

AIA created the Team America Rocketry Challenge in 2003 to celebrate the centennial of flight and to generate interest in aerospace careers among young people. Despite the challenging economic times, the aerospace and defense sector is still hiring technical talent to replace the baby boomer generation that is starting to retire.

Members of the Madison West High School team are: Jacqui German, Tenzin Sonam, John Schoech and Ben Winokur. Their mentor is Dr. Pavel Pinkas, an engineer, and their teacher is Chris Hager, who teaches biology. The team of high school juniors was sponsored by the Madison Wisconsin community through fundraisers held by the Madison West Rocket Club. The Club opted to raise contributions in the low-tech manner of raking leaves.

Complete competition results are available at http://www.rocketcontest.org. High-resolution images and broadcast-quality video are also available upon request.
Posted by Joel Raupe at 1:21 AM