Yet another prediction for Solar Cycle 24 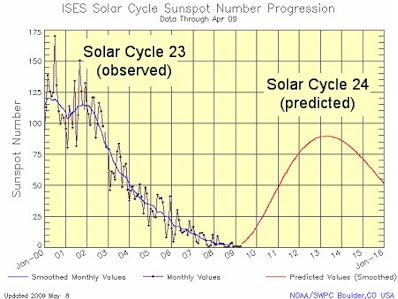 An international panel of experts led by NOAA and sponsored by NASA has released a new prediction for the next solar cycle. Solar Cycle 24 will peak, they say, in May 2013 with a below-average number of sunspots.
"If our prediction is correct, Solar Cycle 24 will have a peak sunspot number of 90, the lowest of any cycle since 1928 when Solar Cycle 16 peaked at 78," says panel chairman Doug Biesecker of the NOAA Space Weather Prediction Center.

It is tempting to describe such a cycle as "weak" or "mild," but that could give the wrong impression.

"Even a below-average cycle is capable of producing severe space weather," points out Biesecker. "The great geomagnetic storm of 1859, for instance, occurred during a solar cycle of about the same size we’re predicting for 2013."

The 1859 storm--known as the "Carrington Event" after astronomer Richard Carrington who witnessed the instigating solar flare--electrified transmission cables, set fires in telegraph offices, and produced Northern Lights so bright that people could read newspapers by their red and green glow. A recent report by the National Academy of Sciences found that if a similar storm occurred today, it could cause $1 to 2 trillion in damages to society's high-tech infrastructure and require four to ten years for complete recovery. For comparison, Hurricane Katrina caused "only" $80 to 125 billion in damage.

"Right now, the solar cycle is in a valley--the deepest of the past century. In 2008 and 2009, the sun set Space Age records for low sunspot counts, weak solar wind, and low solar irradiance. The sun has gone more than two years without a significant solar flare. In our professional careers, we've never seen anything quite like it," says Dean Pesnell of the Goddard Space Flight Center, NASA's lead representative on the panel. "Solar minimum has lasted far beyond the date we predicted in 2007."

"Meanwhile, the sun pays little heed to human committees. There could be more surprises, panelists acknowledge, and more revisions to the forecast."

"Go ahead and mark your calendar for May 2013," says Pesnell. "But use a pencil."
via NASA Science News
The full Article can be read or heard HERE.
Posted by Joel Raupe at 10:13 PM