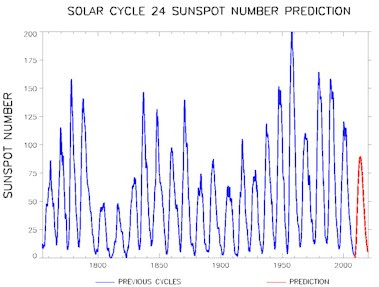 In March 2008, NASA heliophysicists could not agree on the likely magnitude of Solar Cycle 24, or on much else other than that Solar Cycle 23 was obviously on the decline. In the end, their prediction was bifurcated, with one camp predicting a sharp end and a "typical" fast upswing in solar activity and a reduction of Cosmic Ray incidence refracted from the Solar System by a renewed interplanetary magnetic field. A peak in Cycle 23 would happen, these experts agreed, in 2011.

The second camp predicted a bottoming out and beginning to Cycle 24 in early 2008, and a strong peak, but no so great as that predicted by the first group four years later. Both camps agreed "we would know by March 2008."

Indeed, in late February 2008 the Sun's activity was already below that of recent Solar Minima, but the first groupings of sunspots with Cycle 24's signature polarity had appeared and, almost as suddenly, faded away. Officially, Solar Cycle 24 was underway. Nevertheless, the Sun continues to remain mostly calm, Cycle 24 sunspots have occasionally sputtered into sight, though twice in the past year, Cycle 23 sunspots also appeared, and the present Solar Minimum now is officially longer and deeper than any recorded in more than a century.

Dr. Leif Svaalgard, a solar physicist of international standing, predicted the present behavior of the Sun with stricking accuracy. A look at the graph above shows his own research, which is groundbreaking, maps what he believes to have been a bottoming out of Cycle 23 and the slow beginning to Cycle 24 probably in July and August 2008.

Today, NOAA released a revised prediction, the summary of which appears below.

Although its peak is still four years away, a new active period of Earth-threatening solar storms will be the weakest since 1928, predicts an international panel of experts led by NOAA’s Space Weather Prediction Center and funded by NASA. Despite the prediction, Earth is still vulnerable to a severe solar storm.

Solar storms are eruptions of energy and matter that escape from the sun and may head toward Earth, where even a weak storm can damage satellites and power grids, disrupting communications, the electric power supply and GPS. A single strong blast of “solar wind” can threaten national security, transportation, financial services and other essential functions.

The panel predicts the upcoming Solar Cycle 24 will peak in May 2013 with 90 sunspots per day on average. If the prediction proves true, Solar Cycle 24 will be the weakest cycle since number 16, which peaked at 78 daily sunspots in 1928, and ninth weakest since the 1750s, when numbered cycles began.

The most common measure of a solar cycle’s intensity is the number of sunspots—Earth-sized blotches on the sun marking areas of heightened magnetic activity. The more sunspots there are, the more likely it is that solar storms will occur, but a major storm can occur at any time.

“As with hurricanes, whether a cycle is active or weak refers to the number of storms, but everyone needs to remember it only takes one powerful storm to cause huge problems,” said NOAA scientist Doug Biesecker, who chairs the panel. “The strongest solar storm on record occurred in 1859 during another below-average cycle.”

The 1859 storm shorted out telegraph wires, causing fires in North America and Europe, sent readings of Earth’s magnetic field soaring, and produced northern lights so bright that people read newspapers by their light.

A recent report by the National Academy of Sciences found that if a storm that severe occurred today, it could cause $1-2 trillion in damages the first year and require four to 10 years for recovery, compared to $80-125 billion that resulted from Hurricane Katrina.

The panel also predicted that the lowest sunspot number between cycles — or solar minimum — occurred in December 2008, marking the end of Cycle 23 and the start of Cycle 24. If the December prediction holds up, at 12 years and seven months Solar Cycle 23 will be the longest since 1823 and the third longest since 1755. Solar cycles span 11 years on average, from minimum to minimum.

NOAA’s Space Weather Prediction Center (SWPC) is the nation’s first alert of solar activity and its effects on Earth. The Center’s space weather experts issue outlooks for the next 11-year solar cycle and warn of storms occurring on the Sun that could impact Earth. SWPC is also the world warning agency for the International Space Environment Service, a consortium of 12 member nations.

“Our customer growth reflects today’s reality that all sectors of society are highly dependent on advanced, space-based technologies,” said SWPC director Tom Bogdan. “Today every hiccup from the sun aimed at Earth has potential consequences.”

NOAA understands and predicts changes in the Earth's environment, from the depths of the ocean to the surface of the sun, and conserves and manages our coastal and marine resources.