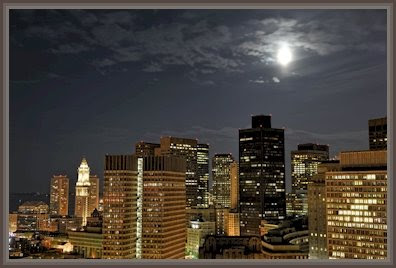 Moon over downtown (Kalim Saliba)
And yet so desperately far away, apparently, in both Space and Time.
What seems a modest view of our worlds, the hustling activity of the city scape is no different than several million campfires, each a common sign of humans busy about the business of survival. How many have been there, among them, those with eyes to see the backdrop of eternity.
Mitochondrial DNA presents evidence that all humans alive on Earth today are but 5,000 generations removed from a common mother. Was she a stargazer? Were her eyes sharp enough to trace out the basins of the Moon?
None can tell, of course, but it is unlikely she was more sophisticated than those of the ancient world, at least as far back as Ur, who saw a powerful Deity. From among them would come one who discerned in the predictable order of this orb an obedience to some still-higher power, and this first astronomer would part ways with the priest-kings and seek his own obedience to this ultimate power.
Whether his descendants, according to blood or faith, seek fealty in the laws or in a sublime personality, together they cannot look away from the witness, they will not ultimately be restrained. And each step has taken a break from the countering instinct of whatever priest-kings there always seems to be, along with its orthodoxy.
They will set off, just as this first sojourner did, even if that decision requires they too become strangers in a strange land.
Posted by Joel Raupe at 3:01 AM