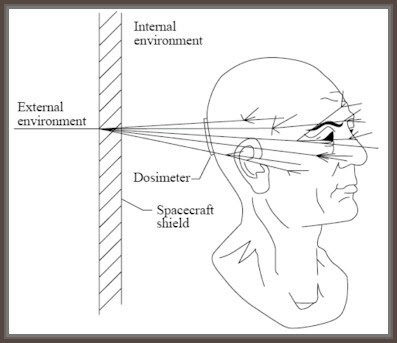 North Carolina State University reported Monday that former students Michael Sieber, Ryan Boyle and Anne Tomasevich, all recent graduates of the textile engineering program, have come up with a blended textile fabric blanket, "a lunar radiation shield with the ability to protect its inhabitants from radiation."

The headline and story, picked up and reported by dutiful space bloggers, as "More Star Trek than Snuggie," raises many red flags, especially when it included the following true statement: "The surface of the moon is exposed to cosmic rays and solar flares – making radiation hard to stop with shielding. When these rays hit matter, they produce a dangerous spray of secondary particles which, when penetrating human flesh, can damage DNA, boosting the risk of cancer and other maladies."

If the team, led by respected material textile scientist Dr. Warren Jasper, professor of textile engineering and advisor for the project, claims to have designed added shielding from Solar Particle Events (and the Sun's variable but steady wind of protons,) for inflatable and light-weight lunar outpost buildings, this news makes some degree of sense. It might even pose a breakthrough.

Because the press release mentions Cosmic Rays, however, and the huge health uncertainties posed by secondary radiation on the lunar surface, both day and night, from these heavy highly energetic interstellar interlopers, reaction is skeptical.

If this inference from the PR is possible, it supports more than a breakthrough. It would represent a quantum leap in material science. It's Flubber.

The news is simply that a team representing North Carolina State University has been selected as finalists in a design competition based on their design for a lunar outpost radiation blanket.

The competition, RASC-AL, the Revolutionary Aerospace Systems Concepts Academic Linkage is cosponsored by NASA and the National Institute of Aerospace, "a design project competition aimed at university-level engineering students," according to the RASC-AL website.

"Their design of a lunar radiation shield, with the ability to protect inhabitants from radiation, was reviewed by a panel of industry experts and chosen as one of ten undergraduate abstract finalists in the Revolutionary Aerospace Systems Concepts Academic Linkage (RASC-AL) competition." They will now proceed to Florida, next month, to compete in the RASC-AL forum.

Back to their submission, however, and why it's being looked upon with skepticism: Some experts estimate as much as 15 meters of lunar surface material would need to be piled on top of a underground settlement on the Moon to provide the similar protections from Cosmic Rays that we enjoy here on Earth.

In general, space radiation in the inner Solar System is composed of radiation from the Sun and Cosmic Rays from beyond, with the latter of very high interest and still not well understood.

The Fermi Space Telescope, launched last summer, is presently making unprecedented discoveries and leading cosmologists to revise upward the possible energies hinted at that are above even this revolutionary space telescope's 10 Billion electon volt ceiling.

Cosmic Rays are of interest to NASA because of both known and unknown health hazards, for future astronauts, because the Space Studies Board of the National Academies of Science strongly urged NASA not to exceed the current allowable dosage limits in the astronaut program.

During Apollo lunar missions astronauts added from one tenth of one percent to over one percent to their individual chances of an eventual "Radiation Exposure Induced Death" (REID). NASA's career limit for astronauts is reached when a four percent increased risk of REID (over the remainder of an individual astronauts life) is attained.

If that happens, you are grounded.

As seen in the illustration above, lifted from "Managing Space Radiation Risk in the New Era of Space Exploration" a 2008 report from the Space Studies Board commissioned by NASA, it is presently calculated that a 20 gm-per-square centimeter aluminum hull design should adequately shield astronauts from Solar Particle Events.

With Cosmic Rays, these hull designs make problems worse, however. Cosmic Rays are very energetic and often massive atomic nuclei, falling into the Solar System from every direction. A human profile actually presents a larger target of opportunity for the shower of secondary particles coming into a ship's cabin after the primary particle's initial impact.

"Space is a harsh environment," wrote the Space Studies Board, "Nevertheless, engineering technology is capable of protecting astronauts against vacuum, extreme thermal conditions, and micrometeoroid environments. Protection from radiation, however, is much less straightforward.

On the Moon's surface, half the sky is blocked from these interstellar Cosmic Rays by the Moon itself, under an astronaut's feet. Thus, the hazard they present can be reduced by 50 percent, immediately, and then by another 50 percent when the interplanetary magnetic field is at its strongest, during Solar Maximum. The threat is never a zero.

Whether the "Lunar-TEX" blanket, as it is called, actually contends primarily with Solar Particle Events, such as Coronal Mass Ejections and flares, or actually represents some breakthrough in shielding humans in deeps space from cosmic radiation remains to be seen, but I think someone has their facts a little squirreled up.

Earlier today yet another well-meaning and decent sort suggested this NCSU team has come up with an electro-static solution, as so many others have suggested; the idea being to generate a magnetic field to refract and essentially repel Cosmic Rays, just as the Sun's massive interplanetary magnetic field is able to do, though never completely and not so well at present, either, during an unusually lengthy Solar Minimum.

The problem with such an idea is the size required. Even beginning to refract the lower energy Cosmic Ray away from the source of a magnetic field would require thousands of kilometers.

Because we would love to see durable space fabric within which we can be shielded against Galactic Cosmic Rays, because it is the greatest threat known to the viability of deep space travel, this story spreading around the Space Community got my interest. But I'm not getting my hopes up, if you get my drift.
Posted by Joel Raupe at 9:11 PM