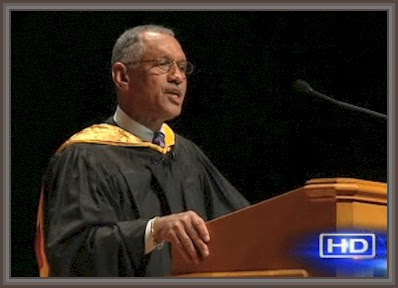 General Bolden at Baylor Medical, Monday
"Impossible is nothing."

Bolden delivered the keynote address to more than 40 graduating students at the Baylor College of Medicine yesterday. Some in the crowd wondered if he would discuss the headlines he made over the last week and a half. At one point, he talked about how special this week has been.

"This week was very emotional for me, particularly Tuesday morning as I listened to crew of STS-125 release the Hubble Space Telescope for what will probably be the last time," he told the graduates.
Video Report HERE.
Posted by Joel Raupe at 1:29 AM