The National Ignition Facility has demonstrated it's Super Laser for the first time, showing the real potential for sustained fusion, materials, and a host of applications for astrophysics and engineering.

From Breitbart : NIF is touted as the world's highest-energy laser system. It is located inside the Lawrence Livermore National Laboratory about an hour's drive from San Francisco.

Equipment connected to a house-sized sphere can focus 192 laser beams on a small point, generating temperatures and pressures that exist at cores of stars or giant planets.

NIF will be able to create conditions and conduct experiments never before possible on Earth, according to the laboratory.

A fusion reaction triggered by the super laser hitting hydrogen atoms will produce more energy than was required to prompt "ignition," according to NIF director Edward Moses.

"This is the long-sought goal of 'energy gain' that has been the goal of fusion researchers for more than half a century," Moses said.

"NIF's success will be a scientific breakthrough of historic significance; the first demonstration of fusion ignition in a laboratory setting, duplicating on Earth the processes that power the stars."

Construction of the NIF began in 1997, funded by the US Department of Energy National Nuclear Security Administration (NNSA).

"NIF, a cornerstone of the National Nuclear Security Administration's effort to maintain our nuclear deterrent without nuclear testing, will play a vital role in reshaping national security in the 21st century," said NNSA administrator Tom D'Agostino.

"This one-of-a-kind facility is the only place in the world that is capable of providing some of the most critical technical means to safely maintain the viability of the nation's nuclear stockpile."

Scientists say that NIF also promises groundbreaking discoveries in planetary science and astrophysics by recreating conditions that exist in supernovas, black holes, and in the cores of giant planets 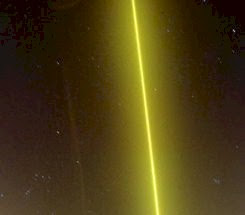 Electricity derived from fusion reactions similar to what takes place in the sun could help sate humanity's growing appetite for green energy, according to lab officials.

"Very shortly we will engage in what many believe to be this nation's greatest challenge thus far, one that confronts not only the nation but all of mankind -- energy independence," said lab director George Miller.

The lab was founded in 1952 and describes itself as a research institution for science and technology applied to national security.

"This laser system is an incredible success not just for California, but for our country and our world," Schwarzenegger said.

"NIF has the potential to revolutionize our energy system, teaching us a new way to harness the energy of the sun to power our cars and homes."
Posted by Joel Raupe at 1:19 AM