17 Steps to the Moon and Back: Anatomy of a Moonshot 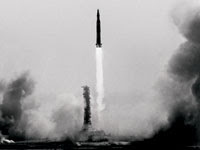 Joe P. Hasler
Popular Mechanics - June 2009
The most remarkable thing about Apollo 11—considering the uncertainties of manned spaceflight and the mishaps that bedeviled NASA on previous and subsequent missions—was its nearly flawless execution, from liftoff to splashdown. “I had the sense that surely something would go awry sooner or later,” flight director Glynn Lunney says. “It was pretty much by the book.” Here are the critical events that had to go right, and what would have happened had they gone wrong.
Read the Article HERE.
Diagram by Dogo
Aerospace Consultant: Dennis R. Jenkins, NASA
Posted by Joel Raupe at 12:59 PM