The Moon at LCROSS impact 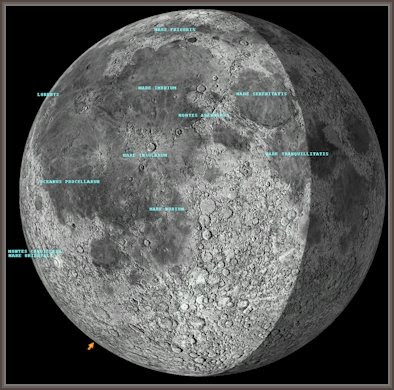 The Moon's possible appearance over Hawaii when LCROSS
impact occurs, next October

There are many, many more qualified amateur enthusiasts, particularly those who've been rehearsing their part in possible Earth-side observation of the LCROSS impact event who can better explain what it all means.

But during their briefing on the up-coming NASA LRO-LCROSS mission Thursday, mission managers gave more than a few hints about what viewers on Earth (not watching NASA-TV) can expect next October 8 when LCROSS finally reaches its still-undetermined target.

Perhaps some of the uncertainty has been narrowed down.

If the October 8 impact holds as a target for the LCROSS impact, as project scientist Tony Colaprete of NASA Ames said Thursday, we might now be able to infer pretty closely the actual time when the impact will occur, and perhaps at which lunar pole.

The eventual target has not been formally chosen, and won't be until well past the vehicle's initial steering encounter with the Moon well after its scheduled launch June 17.

"The event is timed to occur next October 8, when the Moon is over Hawaii," Colaprette said, which is an optimum for Keck Observatory and others on the summit of Mauna Kea, on the Big Island of Hawai'i, and also for the other observing partners "from South Korea to "about as far east as Texas."

It may also be safe to predict LCROSS is gunning for a target in the lunar South Polar region based on this and a nominal steering slingshot maneuver that will set it up for impact much later, after entering an eccentric polar orbit of Earth. After that maneuver, depending on whether LCROSS is initially steered over the North or South pole, it will be too late to switch from one target region to the other.

Expectations are LCROSS will enter it's eccentric polar orbit over the lunar South pole, returning it to perigee back near the earth, and setting up an eventual return encounter with a target in the lunar South.

Back to very early in the morning on October 8, at 14:26.30 UT the Moons, libration in latitude will be -04°56' and -03°35' in longitude, allowing craters and crater groups like Drygalski, Cabeus and Malapert, etc., to be tipped into Earth's line of sight, visible along with Shackleton and the lunar South Pole region in general.

This very favorable south and southwestern limb libration will be have been greater three days earlier at Full Moon, but 14,800 kilometers further away (387,330 km) with a smaller apparent diameter - two full arc minutes of degree smaller.

If the eventual target must be within the nightside terminator choices of qualifying targets will have to lie roughly between longitudes 33.8° and 212.5° (33.8° east & 146.5° West).

On the Farside the permanetly shawdowed candidate could be among the Wiechert crater group, most of which are south of 85.5° in latitude.

On the Nearside at 14:26.30 UTC Faustini will have just undergone local sunset and will still be well-tipped into a favorable line of sight with the Farside's Wiechert crater group lingering just behind.

Among many other qualifying targets will also be some craters among the Demonax group, Amundsen and Idel'son L, etc.

As Chuck Wood says, how many qualifying targets can you pick out?
Posted by Joel Raupe at 2:26 AM

Latest update is that the impact will occur at around 04:30 PDT on 9 October. Expect further constraints on this as the day approaches.