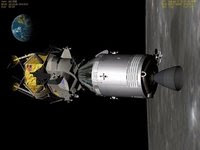 With the rise of a younger crowd being cultivated at NASA, more than just Social Media and Twitter has arrived at Johnson Space Center and all the other specialized NASA campuses, where long-protected turf walls are "a tumblin' down."

Where computer simulation was born, smaller more accessible simulation programs, some around for years, are being pushed upon older managers by a new generation of space scientists and engineers too young to remember when there wasn't a Space Shuttle.

They certainly don't remember Apollo, but they may have already traveled to the Moon - in realtime, more than once, as well as Mars and Miranda, and perhaps even to other virtual star systems, each with planets as unique in character and hazards and possibilities for explorers as those in our Sun's family.

These simulators were not built by IBM, but their realism rivals and is inspired by George Lucas and Industrial Light & Magic of Marin County.

One such "very clean" simulator, with a large world wide community of devoted followers is the Open Source Freeware program Orbiter Simulator, first introduced to the world by the unassuming Martin Schweiger, a German engineer living in England ,in 2001. Orbiter Simulator 2006 P3 is the third and most popular iteration, with websites of scenario and space craft designers creating more "add-ons" than iPhone has apps.

From The Discovery Enterprise, Alex Michael Bonnici recently posted his impressions of how the Orbiter Simulator engine (which runs on Windows machines without detection by the sensitive, all-seeing Operating System Registry) handles an add-on emulating the full Apollo lunar landing mission from start to finish:

"The versatility of the Orbiter Space Simulator continues to amaze me," Bonnici writes. "I first wrote about this free space simulator program in my article "For All You Armchair Astronauts."Here is another awe inspiring film made by TexFilms using Orbiter."

"In “Apollo 11: Remastered” we can all vicariously embark on the epic voyage of Apollo 11 from launch to splashdown and relive this grand adventure. This film is a remake of TexFilms original Apollo 11 release featuring Orbiter Space Flight Simulator and AMSO Apollo addon."

The Discovery Enterprise post by Bonnici is HERE.
Visit the Orbiter Simulator Wiki HERE.
Posted by Joel Raupe at 5:50 PM