Bolden gets nod to run NASA 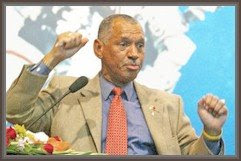 Gen. Bolden's nomination would cap months of political maneuvering, which has left some major agency decisions in limbo. It also has become a flash point for a broad debate over how NASA should conduct future human space-exploration programs.

Gen. Bolden was a NASA official in the early 1990s and more recently worked for two major NASA contractors. His critics contend he's too closely tied to existing NASA programs.

These people, who want to shake up the agency's priorities, include officials of smaller aerospace firms hoping to snare NASA business and some Obama advisers likely to play a role in charting NASA's direction. Gen. Bolden has supported some startup space ventures, but they still want a nominee with a more-unconventional background.

White House officials said Gen. Bolden wasn't available for comment. In a meeting with Mr. Obama in the White House Tuesday, the former astronaut spoke about his "vision for NASA's future," among other topics, according to a White House statement. Before the meeting, Press Secretary Robert Gibbs said the president "hopes that [Gen. Bolden] is the right person to lead NASA in the coming years and through its evolving role."

People familiar with the nomination process said Gen. Bolden has pledged to give weight to the recommendations of an independent commission recently set up by Mr. Obama to look at NASA's future that's expected to report back by summer's end.

Read the Wall Street Journal analysis HERE.
Posted by Joel Raupe at 11:59 AM