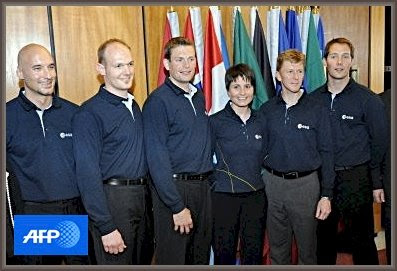 PARIS (AFP) — The European Space Agency unveiled Wednesday a roster of six new astronauts selected after a gruelling, year-long vetting process that began with more than 8,400 applicants.
Europe's new space elite comprises one woman, from Italy, and five men. One of the male astronauts is also Italian, with the others coming from Britain, Denmark, France and Germany.

"I am very proud of the result achieved with this selection," Simonetta Di Pippo, ESA's Director of Human Spaceflight, said at a press conference.

"This result exceeds our greatest expectations. Not only do we have a group of outstanding astronauts, we also have a representation of European countries that reinforces the support for human spaceflight and exploration in Europe."

The new recruits range in age 31 to 37 years old, and are the first to join the European Astronaut Corps since 1992. This is only the second selection process ever carried out by the ESA.

They will join eight other members of the Corps -- all men -- and will start their training to prepare for future missions to the International Space Station (ISS), ESA said.
Posted by Joel Raupe at 4:01 PM