The Hunt for the Moonwalk Tapes 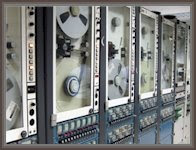 Sensational work by LOIRP restoring Lunar Orbiter data has inspired much conversation about what might be done to show the original Black & White video of Neil Armstrong's first steps on the Moon at never-before-seen fidelity, or at least as they were intended to be viewed.
It's long been acknowledged the frame-per-second rate of the video downlinked from Apollo 11, the show hundreds of millions on Earth watched live from the Sea of Tranquillity, improperly matched the resolution of standard analog television.

Unlike those of us watching in our living rooms, the original camera designers cringed when those first images came into view on the evening of July 20, 1969. They knew the image seen would be hazy, but not that hazy. But the moment passed and mission managers quickly moved on to color television, beginning with Apollo 12.

An incidental shot of the Sun almost immediately toasted the first color television camera to be hand-delivered to the Moon with Apollo 12. The first true color television moonwalk video would wait until 1971 and Apollo 14, featuring Alan Shepard and Edgar Mitchell hiking through the slopes of Fra Mauro. Without a rover, however, much of that mission took place out of view of the live television camera, as Shepard and Mitchell search for the rim of Cone Crater.

By the time the best video was returned from the final three missions, each with rovers, remote controlled cameras and uplinks, a lot of public attention had been lost. The Big Three networks were swamped with viewers complaining of missing their soaps.

The designers in charge of the very historic Apollo 11 first-footage have long believed that the original data stream, captured in Australia, could be reformatted to show generations to come those images as intended, as no one has seen those moments before. There's just one problem. The data tapes and any copies that might have been made are "missing."

NASA is undergoing an "informal search" for that video and has not given up finding the data, in one form or another. An update on the search "for the missing Moonwalk Tapes" can be reviewed HERE.
Posted by Joel Raupe at 3:53 PM