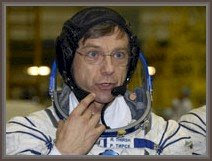 CBC.CA Just when most Canadians are preparing to break out the barbecue, astronaut Robert Thirsk will be saying goodbye to fresh food, swimming pools and sunshine until November.

Thirsk is a member of a six-person crew that will live on the International Space Station for six months. On May 27, he and two other crewmates are scheduled to launch from Kazakhstan to join the other three already aboard the station.

This will be Thirsk's second trip into space, and the first time a Canadian has participated in a long space mission.
Endurance will be tested

Many people think being an astronaut is a glamorous career, but Thirsk says he's heard from his colleagues that life on the space station is anything but.

"Living aboard a space station is not like living in a four-star hotel," Thirsk told the CBC News in a February 2008 interview. He is currently sequestered at NASA in preparation for his mission and was unavailable for interviews.

He'll sleep in a bunk the size of a telephone booth, drink water that comes from recycled sweat and urine, and eat freeze-dried food.

A major goal of the mission, dubbed Expedition 20/21 by NASA, is to test the endurance of the human body in space. Scientists hope to use the information to one day build space colonies on the moon and Mars.
Read the profile HERE.
Posted by Joel Raupe at 9:58 AM