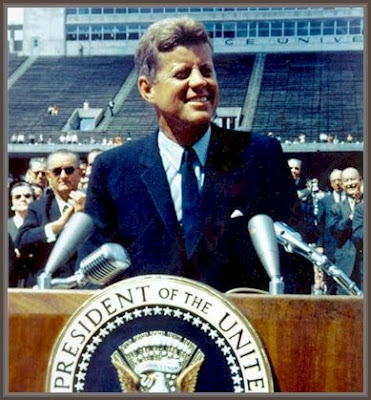 "Its hazards are hostile to us all. Its conquest deserves the best of all mankind, and its opportunity for peaceful cooperation may never come again. But why, some say, the moon? Why choose this as our goal? And they may well ask why climb the highest mountain. Why, 35 years ago, fly the Atlantic? Why does Rice play Texas?"

The Rice students in the crowd cheered wildly, the schoolkids taken somewhat aback.

When President John F. Kennedy stood in front of Congress in May 1961 to propose "landing a man on the Moon and returning him safely to the Earth," the United States had just 15 minutes and 28 seconds of experience in space from the flight Alan Shepard's Friendship 7.

After the launch of the Sputnik satellite in 1958 and the orbital flight of Soviet cosmonaut Yuri Gagarin, Kennedy began looking for a way to best the USSR and show off America's technological prowess.

"The launch of Sputnik was a real wake-up call for America," said Stacey Bredhoff, curator of a new exhibit at the John F. Kennedy Presidential Library & Museum in Boston. "The thought was if they could send a satellite into orbit," their missiles could reach the United States.

"President Kennedy sent out a memo asking, 'Do we have a chance of beating the Soviets (in space)?"' Bredhoff said.

That memo is on display next to Vice President Lyndon B. Johnson's reply.

Just in time for the 40th anniversary of the first Moon landing, the Kennedy Library has launched "Moon Shot - JFK and Space Exploration" that tells the story of the earliest days of America's space race with the Soviet Union.

Read the article HERE.
Posted by Joel Raupe at 5:49 AM