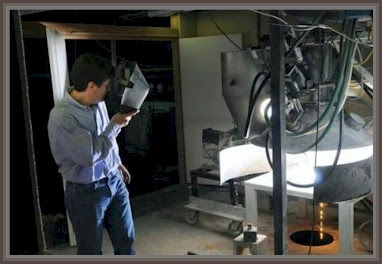 BOULDER — There isn't a big demand for man-made moon dirt, but there is one customer — the National Aeronautics and Space Administration — and that's enough for Steve Wilson and Mike Weinstein.

NASA plans to construct a lunar base by 2024 and needs to know a lot about moon dirt.

So Wilson, a U.S. Geological Survey scientist, and Weinstein, a principal at Zybek Advanced Products Inc., teamed up to make as much as 100 tons of moon dirt for NASA.

It was just a few minutes after the first moon landing, in 1969, when astronaut Neil Armstrong, trying to plant an American flag, learned that moon dirt wasn't Earth dirt.

The surface looked sandy, but Armstrong struggled to get the pole in.

Mineral molecules on Earth, on the other hand, tend to be rounded at the edges because of weathering. And there's not much weather on the moon.

The Apollo astronauts also found that the moon dust got clogged in the joints of their spacesuits and was sharp enough on its edges to tear the fabric.

When NASA decided in 2006 to develop a solar-powered lunar base designed to use the moon's natural resources to supply air and energy, the agency was in the market for moon dirt.

The USGS, which makes "reference" samples of geochemical materials for scientists, was asked to find something akin to moon dirt, or, as geologists call it, "regolith."

"We knew the constituents of regolith from the Apollo samples, so the question was what on Earth came close?" Wilson said.

The answer turned out to be waste rock from Stillwater Mine, near Nye, Mont.

The material — crushed to simulate the angularity of molecules without being ground too much — got close to moon dirt, Wilson said.

The two are created by the bombardment of the atmosphere-deficient moon by micrometeorites.

The "lunar simulant" will be used to test breathing filters, systems to protect surfaces, bearings and gears from dust and grit, and the performance of vehicles and hardware, said Carole McLemore, NASA project manager.

"Anything that goes to the moon is going to touch regolith," she said. "So we want to know how it will perform before it gets to the moon."
Posted by Joel Raupe at 10:40 PM