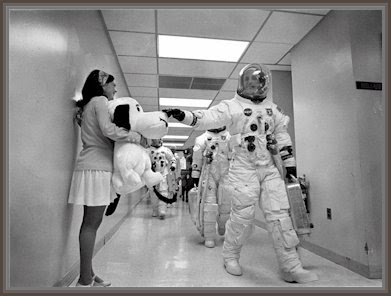 On May 18, 1969, Apollo 10 was launched on a mission to orbit the moon. The flight was a test run, a crucial dress rehearsal leading up to the historic Apollo 11 mission that two months later carried the first people to walk on the moon.

"The three-man mission was a "dress rehearsal" for the lunar landing just a few months later. It tested the full Apollo spacecraft - both the mother ship (CSM) and lander (LM) - in lunar orbit, going down to within about 15 kilometres of the lunar surface at one point.

"So why stop there? The answer you'll find in simple accounts is that Apollo 10's lander was too heavy to land and take off again. The reality was more complex."
More Background from Henry Spencer, HERE.
Posted by Joel Raupe at 5:24 PM