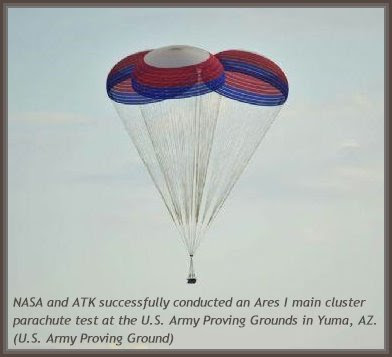 "The three parachutes, each with a 150-foot diameter or about half the size of a football field, slowed a 41,500-pound weight that simulates the size of the Ares I first-stage booster. The parachutes are the largest of their type in the world. The weight and chutes were dropped from a C-17 aircraft at 10,000 feet, and successfully deployed at 4,500 feet above the U.S. Army's Yuma Testing Ground.

"United Space Alliance at the Kennedy Space Center, who subcontracted with ATK, manufactured the parachutes. Designers modeled the parachutes after the 136-foot diameter ones that currently slow the solid rocket boosters from the space shuttle enough to splash down into the Atlantic Ocean. The new chutes also will slow the Ares I rocket for an Atlantic landing, where the rockets will be recovered, refurbished and reused. "

Read the Story HERE
Posted by Joel Raupe at 3:24 PM