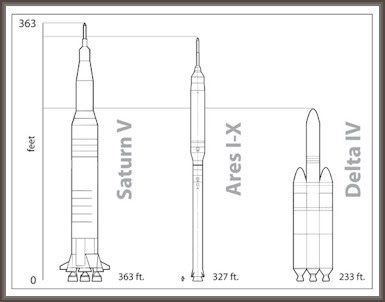 Computer analytical models developed by the agency have predicted how the Ares I-X will behave when launched. The upcoming ground tests will validate those vehicle models that were used to derive the flight control parameters by comparing test data with the predicted vehicle flight behavior.

Called "modal survey testing," the tests include two partial stack tests and a test of the full Ares I-X vehicle on the Mobile Launch Platform that are located in Kennedy's Vehicle Assembly Building. The first partial stack test will involve only the top part of the vehicle that includes the launch abort tower, crew module, service module and spacecraft adaptor. The second partial stack test is composed of the interstage, frustum and simulated fifth segment of the first stage of the rocket.
More via SpaceRef HERE.
Posted by Joel Raupe at 12:13 AM