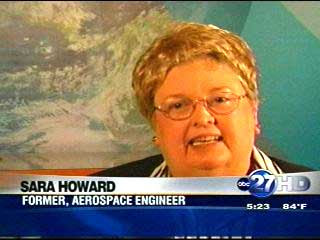 TALLAHASSEE, FL (WTXL) -- Next week the museum at the John F. Kennedy Presidential Library will unveil a special new exhibit, Moon Shot. It celebrates the 40th anniversary of the first moon landing, and President Kennedy's grand vision that made the achievement possible. But there are also more than 400,000 other people that made it possible. And many of their stories have been lost. But one Tallahassee woman hopes to change that by telling her story of the women working as engineers in the space age.

It was 1961 when President Kennedy challenged the nation to land a man on the moon, his speeches were heard around the world, and his spirit of adventure pushed many young minds into aerospace technology among them, Sara Howard.

After graduating with a degree in math and minor in astronomy, the Boeing Company hired her. She was one of the first women aerospace engineers to work on to the Apollo Program.

Sara was hired on in New Orleans with only one other woman to work on the first of three stages on the Saturn 5 Rocket.

Sara and Sally were part of a team called Systems Test Engineering.

The rockets they tested generated 7 1/2 million pounds of thrust. Saturn 5 was designed in part by Wernher Von Braun who a young Sara is pictured with here.

It's part of a history she wants people to know, the role she and other women played as engineers in sending 2 men to the moon just eight years after she heard the presidents call. She says with 23,000 contractors, keeping up with all their employees was not a priority.

Sara says she loves to share her story because otherwise the women behind Apollo would be forgotten and now she hopes to spread to her love of the universe to younger minds.