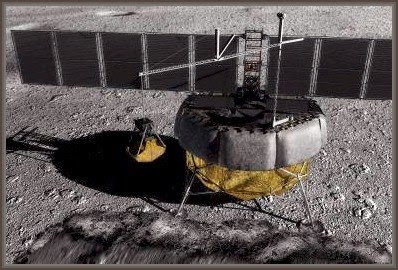 Notional Fission Surface Power system
Have you ever wondered how you'd make your morning cup of java if you lived on another planet, or perhaps the moon? That steaming beverage would be a must on a cold lunar morning.

But with rare sunlight, no coal or wood to burn, and no flowing water for hydro-electrical power, how would you make that cup of coffee, much less cook breakfast, heat your abode, and power the life support equipment and tools you needed to live and work up there?

NASA, planning for a future lunar outpost, has been asking those same questions lately.

There's more than one way to generate power on the moon. Fission Surface Power is one of the options NASA is considering. If this method is chosen, an engine invented in the early 1800s by Scottish brothers Robert and James Stirling could help make it work.

The Stirlings were so proud of their creation that they made it their namesake – and with good reason. Over the years the Stirling engine -- the reliable, efficient "little engine that could" -- has earned a sterling reputation here on Earth, and it may one day prove its worth on the moon.

"Inhabitants of a lunar outpost will need a safe and effective way to generate light and heat and electricity," says Mike Houts of NASA's Marshall Space Flight Center. "The tried and true Stirling engine fits the bill. It's not only reliable and efficient, but also versatile and clean."

NASA is partnering with the Department of Energy to develop Fission Surface Power technology to produce heat and feed it into a Stirling engine, which, in turn, would convert heat energy into electricity for use by moon explorers.

It's not certain that this kind of power system will be adopted by NASA, but it does have some very appealing qualities. Houts explains: "A key advantage to this power system is that it wouldn't need sunlight to operate. An FSP system could be used to provide power any time, any place, on the surface of moon or Mars. It could be used at the poles and away from the poles, it could weather a cold lunar night, and it would do well in places like deep craters that are always shaded. Not even a swirling, sunlight obscuring, Martian dust storm could stop it."

NASA's engine would only need to produce 40 kW or less power – just enough for a lunar outpost.

"This power level is high by space standards but extremely low by Earthly standards," says Houts. "It's about 1/20,000th of what a typical Earthly reactor puts out. We'd only need a tiny reactor on the moon – the fueled portion would be only about 10 inches wide by 1½ feet long."

It would provide more power with less mass than other power systems. The whole assembly, radiator on top of Stirling engine on top of reactor, could be stowed in a fraction of the lunar lander.

Before developing the final system, Houts and his team are testing with non-nuclear power for proof of concept.

After the test system proves the viability of the concept, the team could be directed to build the "real thing," drawing heavily on US and international terrestrial reactor experience.

"It would be built from stainless steel and fueled by uranium dioxide. This combination has been used in terrestrial reactors throughout the world, so scientists and engineers are well-versed in its operation."

The unit would not be active at launch, but would be "turned on" once in place on the lunar surface, where it would be surrounded by shielding to prevent any hazard from the radiation emitted.

"It would be very safe," says Houts. "And the beauty of the system is that it would be practically self-regulating."

Here's how it would work: Inside the reactor is a bundle of small tubes filled with uranium. Outside the reactor are control drums -- one side of each drum reflects neutrons and the other side absorbs them, providing a way to control the rate that neutrons escaping the reactor core are reflected back in. To start up the unit, the absorbent side of each control drum is turned out, away from the reactor core, so the reflective material faces in and sends escaping neutrons back in to the core. The resulting increase in available neutrons enables a self-sustaining chain reaction, which produces heat.

The system would use only a miniscule amount of fuel -- 1 kg of uranium every 15 years – and still have enough reactivity to run for decades.

"We give it a life expectancy of 8 years, though, because something else would falter before the fuel would run out."

After shutdown, radiation emitted by the system would decrease rapidly. A replacement system could easily be installed at the same site.

After all, coffee may be in high demand up there!
More Information HERE.
Posted by Joel Raupe at 8:40 PM